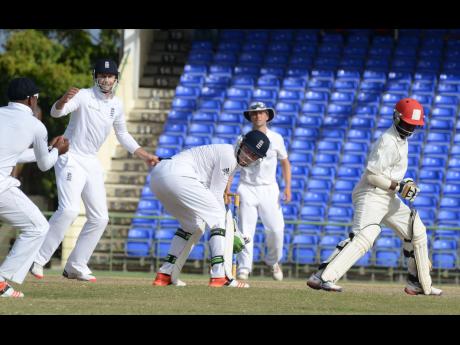 St Kitts Invitational XI batsman, Laison Peters (right), is out caught by England's Chris Jordan (left) off the bowling of James Tredwell (out of pic), during yesterday's second day of their tour match at Warner Park, St Kitts.

An unbeaten knock of 20 from Akeem Saunders thwarted England's efforts to force an outright victory against St Kitts Invitational X1 as their two-day match ended in a draw at Warner Park here yesterday.

Saunders, a middle-order batsman, hit four fours in a defiant innings that repelled England's push for victory, with the home side losing second innings wickets quickly after the visitors had piled up 379 for six declared.

Leon Clarke contributed 17 and Jacques Taylor was not out on 13, the only other batsmen to get into double figures for St Kitts.

Captain Alastair Cook hit a century, his first century for England in 18 months, after resuming from his overnight score of 95. Cook hit 101, with 11 fours and a six, before retiring out. Cook's opening partner, Jonathan Trott, had made 72 on Monday.

Half-centuries from Ian Bell (59 retired) and Joe Root (64) allowed England to declare and push for victory as the hosts, who managed 59 in their first innings, slipped to 24 for six inside 18 overs.

Taylor, Elvin Berridge, Steve Liburd and Clark each picked up a wicket for the local side.

For England, James Tredwell claimed 3-25, while Liam Plunkett and Mark Wood, who were drafted in to bowl in the second innings, took a wicket each.

England will now prepare themselves for another two-day game, starting today, against the same opposition.