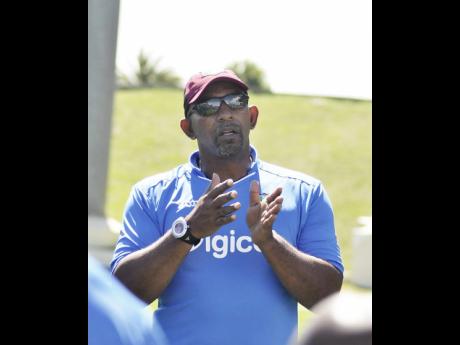 West Indies intend to have a crack at their massive victory target of 438, but head coach Phil Simmons says their approach will be determined by the success of the first hour of today's final day.

The Caribbean side finished yesterday's penultimate day on 98 for two, still 340 runs adrift of their target, but Simmons said the position represented where they had wanted to be at the close.

"At the end of the day, we wanted to be about 100 for one, and tomorrow morning, I think the first hour is important," said the newly appointed coach.

"We can't lose any wickets in the first hour. We are a team that scores quickly, so going into the last session, it depends on where we are as to if we [can] have a go at getting the runs, but with me, it is always [looking] at how you can get the runs before you look at how you can save it.

"When we come tomorrow morning, we'll assess what we need in every session and see how we end up at tea and then we could know whether we chase the runs or play it out."

Resuming the day on 116 for three, England declared their second innings on 333 for seven, about half-hour before tea.

Simmons added: "England are going to try everything to get wickets in the first hour. If we can play well, then we set up a good day's play, but if England play better than us in that hour, then it may be easier for them than for us."