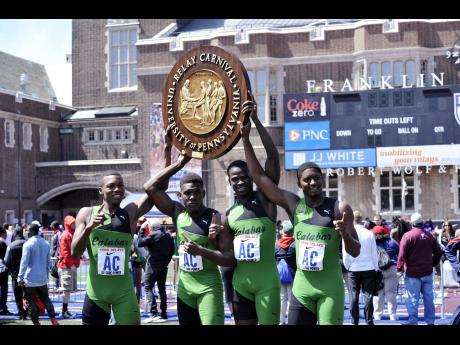 Despite being at the centre on an off-field storm, Calabar High School shone brightly at the 121st Penn Relays.

Calabar clicked off three wins, with one standing out for special mention. That special moment came in the Championship of Americas 4x100 metres. That's where Calabar reminded everyone of its superiority in sprinting.

With Xandre Blake leading off, team captain Michael O'Hara speeding the second leg and long-jump winner Julanie Walker running his usual fine third leg, Calabar had a small advantage. Seanie Selvin had to fight off Ivan Henry of St Jago, and he did. Then the clock stopped at 39.63 seconds.

Not only had Calabar cut the year-old record set by 2014 winners Jamaica College, but O'Hara's team had produced an amazing performance.

Franklin Field, the Philadelphia track upon which the Penn Relays is contested, has short straights and more curves than most others. That restricts the potential for fast 4x100m running. Yet the 39.63 is faster than any team other than Calabar has ever run.

Jamaica College, St Jago High School and Wolmer's Boys' are the only other Jamaican high schools to have run under 39.80 seconds in athletics history.

Jamaica College had set the former Penn Relays record last year with a fine time of 39.72 seconds. Thanks to Calabar, that time is now the second-fastest ever at the 121-year-old relay carnival.

Remarkably, the 39.63 was achieved at Penn without first-choice lead-off man, Edward Clarke. It was amazing, given that, and the oddly-configured Franklin Field track.

Brilliantly coached by Michael Clarke, this Calabar team may well be able to break 39 seconds if any other opportunities remain this season.

With O'Hara on anchor, Calabar then closed its Penn Relays campaign with victory in the 4x400m.