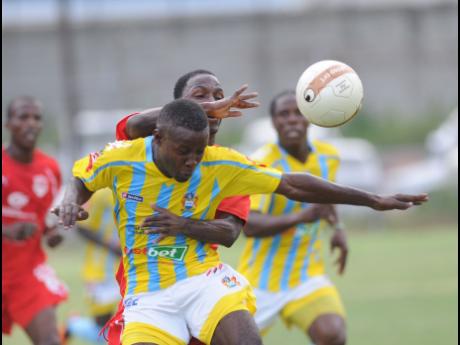 Ricardo Makyn
Waterhouse's Damarley Samuels (foreground) heads the ball as he is challenged from behind by Boys' Town's Daemion Benjamin, during a Red Stripe Premier League football match at Waterhouse Mini Stadium in September 2013. Waterhouse recently pulled out of the Caribbean Football Union Club Championship.

The 11th-hour withdrawal of Waterhouse Football Club from honouring its first-round fixtures in the Caribbean Football Union (CFU) Club Championships in Trinidad and Tobago has again, among other things, brought into sharp focus the dire and desperate financial troubles of local football clubs.

The decision of the Waterhouse club management, voluntary or forced, indicates an acceptance by the club that participating in this tournament was not worth its while.

At least one other top local club, Tivoli Gardens, had opted out of this tournament after concluding that the costs to participate far outweigh the benefits.

Having qualified as one of two Jamaican teams for this year's tournament, the stark reality that faced Waterhouse was that of incurring the bulk of the major costs associated with the event, including substantial travel expenses, with the only respite being that the hosts of the first-round games, in this case, Trinidad and Tobago, must cover the cost of accommodation for 25 members of each touring delegation.

This is all in a context where participating teams receive absolutely no financial reward, even for winning the CFU tournament.

The light at the end of the tunnel is the slender possibility of advancing to the CONCACAF round, where the grand incentive is now a US$40,000 subvention for each away fixture, which we are told, is hardly enough to offset the imposing expenses, travel and so forth.

Outside of bragging rights and some potentially valuable travel and bonding experience for members of the teams, the only conceivable reason why local clubs such as Waterhouse, who participated last year, and Montego Bay United, who are in the mix this season, is that 'pie in the sky' that some scout from some wealthy club, somewhere in the world, will spot and be impressed by one or more young players on show in the tournament, and that a lucrative professional contract could materialise at the end of the day.

Based on the corner that Waterhouse was forced into for this year's event and the 'pretty penny', I am reliably informed, it cost Montego Bay United to honour their three first-round games in Haiti, it is fair to say the reality is slowly but surely hitting home, that this tournament is hurting local football clubs more than it is helping.

The idea, itself, of crowning a Caribbean club champion and, by wider extension, a CONCACAF club champion, outside of being a good concept, is in keeping with what obtains in other confederations of football such as Europe and Asia.

Significantly though, in terms of the comparative financial incentives, it's 'chalk to cheese'.

It is not a fair comparison to make because of the difference in the dynamics of these two football confederations but, just looking at it, in the most basic terms, thinking about the millions of Euros top club football competitions in Europe generate, compared with the desperate and pathetic situation in CONCACAF, there is a sense of imbalance and, indeed, injustice about this vulgar disparity.

Clubs in the CFU are basically being impoverished by participating in their premier club tournament, while clubs in places such as Europe are being significantly enriched by competing in their equivalent club competition.

In the name of football, this raucous imbalance needs to be addressed urgently.