Sherone Simpson is back in form 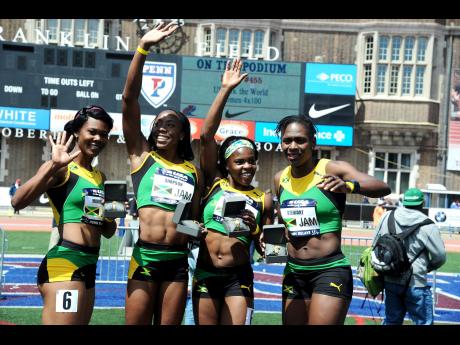 This columnist, angered by the trials (take that anyway) surrounding one who was always a favoured athlete, wrote that the former Wolmer's Girls athlete was "pleasingly pushed by a Sherone Simpson comeback from adversity - 22.97".

That sentiment, albeit genuine, in no way sums up the feelings harboured about this athlete.

"Adversity" could be her pet name.

A false start at the 2002 World Juniors on local soil - while leading off the eventual gold medal-winning sprint relay - could have ended her career in its embryo.

How could she, as a mere relay runner, have faced her then-more illustrious teammates, Kerron Stewart, Anneisha McLaughlin and Simone Facey - all individual medallists, or in Stewart's case, a fourth-place finisher - in their stand-alone events?

This, if the 'one mistake and you are out' rule existed then.

As she said to this journalist, elated at being the first to put her on air: "I felt as if I wanted the earth to open up and swallow me."

The former Manchester High girl went to the Beijing 2008 Olympics with the threat of replacement in the 100m field, by an 'out of the frame at the Trials' VCB, groping for a lane in the women's individual event, having medalled in Athens the last time of asking. Thankfully, she had stern no-nonsense backing.

Facing what could have resulted in mutiny, who would have dared to cement the fleeting thought of an ouster?

Her silver medal in Beijing - Shelly-Ann's coming-out party - was not hers alone, having to share title, if not medal with Kerron Stewart.

More adversity: her own untenanted space on the podium would have been preferred.

Then comes the drug charge, the fear of every Jamaican class athlete who comes under more spotlight.

Sherone and her handlers fought that with the vigour and vitality that typify a true champion. The victory was won, and along with MVP-mate Asafa Powell (both now conditioned elsewhere). She could compete again.

This columnist wishes her the ultimate best as she charts her way back from what seemed to be the abyss of disaster - banished to the wilderness of the sport.

The shouts from the stands as she challenged the empress at the UTech event, 'Sherone is Back', is the music that will hopefully be the backdrop as she dances her way back to another global showcase of stars.

down to the wire

Another elite global event organised by the International Association of Athletic Fede-rations (IAAF) is upon us. The world governing body has done a double take, with Bahamian city Nassau again the venue, after the inaugural staging in 2014 of the IAAF World Relay Championships.

A look at the 'down to the wire' naming of the Jamaican team speaks to some exciting action among the female sprinters. They are 10-strong and led by the new lady, Elaine Thompson, whose 10.92 at the UTech Classic is a joint world lead (USA's Jenna Prandini).

Without the benefit of qualifying Trials and the 1-2-3 squad selection comfort level it affords, there is no envy for the decision makers. This thought is triggered by past confusion as to who should or should not run and on which leg.