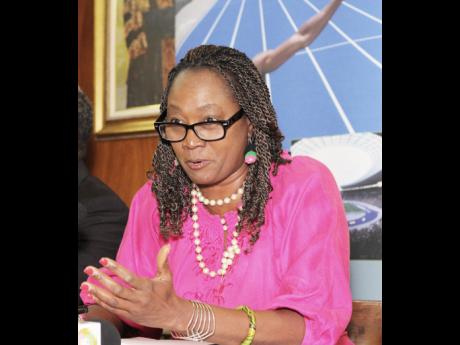 Recently, a number of high-school athletes have turned professional, ostensibly denying themselves potential opportunities to take up scholarships to colleges in the United States.

Jackson, who is the sports development director at the University of the West Indies (UWI), Mona campus, warns, however, that athletes run the risk of ruin because they are not focusing on education.

Calabar High School athlete Michael O'Hara and Wolmer's Boys' Jaheel Hyde, who this year signed professional contracts with Jamaican telecommunications companies, were recently both initially barred from representing their respective high schools at the Penn Relays at Franklin Field in Philadelphia because of the regulations that govern high school sports in that state.

Each athlete, should they choose to do so, might also not be able to accept scholarships to US colleges, that have aided the development of Jamaican athletes for decades.

Jackson, who earned a first degree on a track scholarship to Alabama A&M University, believes athletes are taking a big chance with their lives when they ignore academics and focus almost exclusively on what are ostensibly short sporting careers.

"You are holding back other opportunities. I am sure that the people who had engaged themselves and their parents and their advisers, who were so happy to think that they were getting a lot of money, whatever the engagement was; but a lot now to what later?" She asked.

"There might be some who are of the mind, 'well, it doesn't matter I am not going to a US college', but you really don't know. What you're doing is restricting your options. You never know where life might take you. You can make the choice, but you have to be clear about why you have made the choice. If you stop and look around at some who have made the choice, the question must be asked, 'where are they now?'"

That being said, for those who choose to take the money and run, Jackson said local colleges should continue to accept those athletes.

"We need to be able to uplift our collegiate athletes. If our students are able to get an education and they can compete, we would like to give them that opportunity," Jackson said.

"They are getting an education which will afford them to do something later on, so we can afford to have those professional athletes participating with us as long as they recognise that it is an education that they're getting while they compete."

Jackson believes that student athletes need to take greater care how they choose to proceed. Student athletes and their handlers, she said, really need to focus on what is truly important for the development of the athlete as an individual.

"We lose sight of what will happen for the future if we don't clearly focus on the academic as the route for being able to survive for 15, 30, 35 years from now," she said. "What happens if we lose sight and start focusing on sport?

"If a person gets injured, the person who is giving the money, would they value the person anymore?

"Therefore, what has to be important is getting an education, which would be that foundation that would allow for you to be able to continue the use of your talent while preparing for what is going to happen down the road. If we start to focus on just track and field and making money at such a young age and we don't understand how to use that money to be able to invest that money, what we have is a short-lived situation."