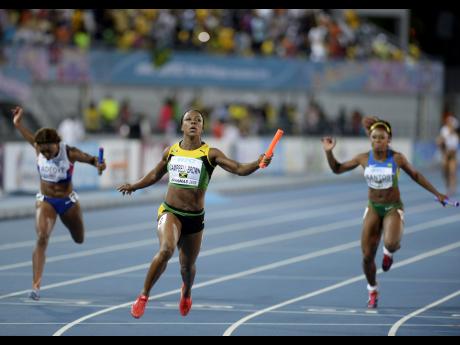 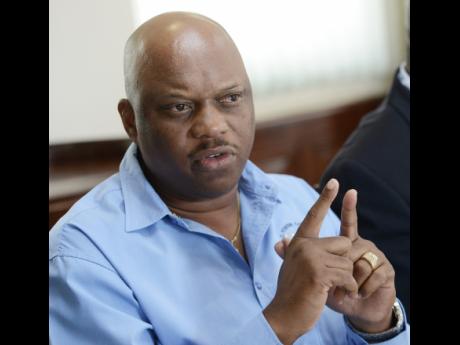 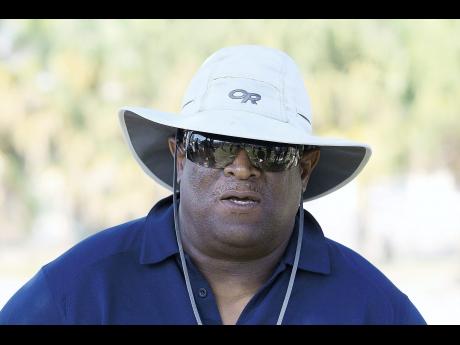 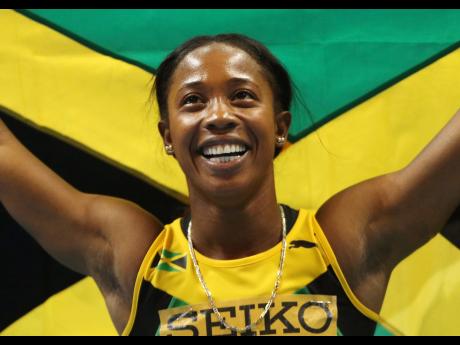 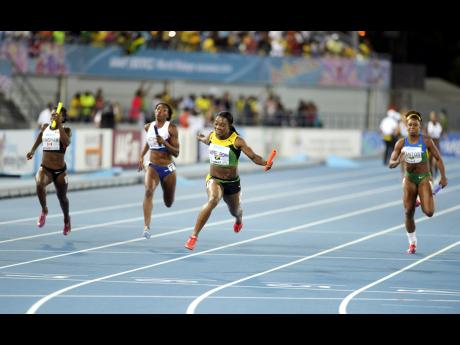 Anchor runner Veronica Campbell-Brown (centre) dips at the tape as she leads Jamaica to a gold-medal finish in the women’s 4x100m final at the IAAF World Relays at the Thomas A. Robinson Stadium in The Bahamas on Sunday.
1
2
3
4
5

With Jamaica's solid showing at the International Association of Athletics Federations (IAAF) World Relays coming amidst reports of Shelly-Ann Fraser-Pryce being pulled from the meet after an ultimatum was not met, technical leader Maurice Wilson called for greater unity.

But did the sprinter and her team feel like she was at the wrong end of a deeper team-selection issue?

However, as often seems to be the case, Jamaica's success on the track didn't come without controversy.

Fraser-Pryce was expected to feature in the women's 4x100m final on Sunday, but she was, according to our information, pulled from the team by her MVP Track Club coach, Stephen Francis, after not being selected to compete in the heat earlier, despite making at least two requests.

The triple world champion was originally selected to compete in the 4x200m, but later switched to the shorter event, with reports suggesting that Francis, upon realising that the sprinter was not listed for the first round, told Jamaican team officials that his charge would not be available for the final if she was not given a leg in the heat.

There has, however, been strong suggestions that the problem originated from the perception that there is a conflict of interest, resulting from several of the official coaches' personal involvement with athletes on the team.

This is a common situation for Jamaican teams, but in the absence of a trial to select the team, coaches at meets like the IAAF World Relays enjoy even more discretion.

Pointing to several perceived cases of favouritism and team selections being influenced, one source close to MVP suggested that the World and Olympic champion was not afforded the same facilitation given to other athletes, who benefited because of their coach's position as an official team coach, or their close relations to same.

Paul Francis, brother of Stephen Francis and coach at MVP, was also a member of the official coaching panel.

"Some of these coaches are more concerned about getting their athlete on the track so that they can get a share of the cash prize," said the source. "Other athletes asked to run both rounds, and they were allowed to. Other athletes changed their event without issue."

However, Wilson, while admitting that there may have been attempts in the past by coaches to influence decisions, played down the talk of a conflict of interest, labelling it as a case of miscommunication, and pointed to the overall success of the team and its support team.

"That particular situation is something that is left to be resolved, and we are happy that we were able to have a team to represent the country," Wilson said. "I am quite sure Shelly-Ann is a loyalist, and she means the country well, and whatever problems that existed, we will solve them.

"We need to understand that whenever there is a situation where there is no trials, it becomes very complicated to choose a team. There will always be disagreements in terms of team selection, but in this particular case, I think there was some miscommunication," Wilson added.

"I think the team performed extremely well. I think the management, including the coaches, did extremely well under the circumstances, taking into consideration that some of our top athletes were not here," said Wilson. "Persons that we had expected to run, did not for whatever reasons, but the persons who came out to take part did their country proud, and we saw the results of that.

"Based on what transpired here, as Jamaicans, we need to understand that many nations are trying to do what we have done for the last seven years, so we cannot become complacent; we need to unify. Whatever problems exist, we need to make sure we find a way to come to the table and solve them," Wilson pleaded.

On the matter of coaches on Jamaican duty favouring their own athletes or external coaches influencing selections, Wilson had this to say:

"The possibility exists that there can be covert attempts. I do not necessarily think this was the case in this particular situation involving Fraser-Pryce, for instance, but I think there was miscommunication, and that will have to be resolved," said Wilson.

"My recommendation to the selection committee is that every single athlete that is interested in representing Jamaica at an event like this where there is no trial, that they make sure that the athletes indicate their fitness by putting down some performances before the meet," said Wilson.