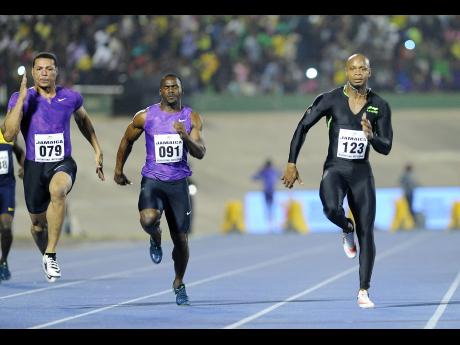 Ricardo Makyn
(From left) Ryan Bailey, Nesta Carter and Asafa Powell compete in the men's 100-metre final at the Jamaica International Invitational track and field meeting at the National Stadium on Saturday night. Powell ran a world-leading 9.84 to beat Bailey (9.93) and Carter (9.97), who placed second an third, respectively. 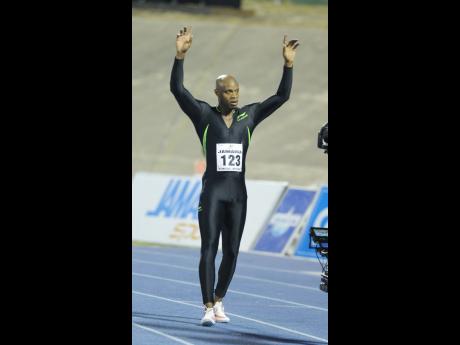 More than 25,000 people broke into rapturous prolonged cheers as Asafa Powell sped across the finish line to win in the men's 100 metres at the Jamaica International Invitational at the National Stadium in Kingston on Saturday night.

They went wild as the orange numbers 9.84 flashed on the in-field clock.

It was the fastest time in the world this year, signalling that Powell, the former world record holder, was back to his best. The United States of America (USA) Ryan Bailey (9.93) and Nesta Carter (9.98) trailed in his wake.

Powell last competed at the National Stadium in June 2013. Back then, he finished seventh in the 100m, but was soon after provisionally suspended after his urine sample - tested after the final of the men's blue riband sprint at Jamaica's National Championships - turned up traces of the stimulant oxilofrine.

Powell was subsequently banned for 18 months by a Jamaica Anti-Doping Disciplinary Panel, a sanction that was later reduced to six months by the Court of Arbitration for Sport (CAS), that had also ordered a stay of the ban prior to the appeal hearing in June 2014.

Saturday night's run was the first time Powell was competing on Jamaican soil since that time and marked a triumphant return for the beloved sprinter, who has been training in Texas since being allowed to return to competition.

The 32-year-old sprinter expressed that given the context of the occasion, the time, his 84th under 10 seconds, meant relatively little.

"Just to run in front of this crowd is just great. I don't even care about the time. Being here and getting this reception from my people is just overwhelming," said an elated Powell, after collecting his winner's prize with Prime Minister Portia Simpson-Miller and Sports Minister Natalie Neita-Headley standing among the thousands looking on and applauding with great admiration.

"Just to come out here and give them their money's worth and just for them to show their appreciation, no regrets."

Powell's agent Paul Doyle, who has stood behind his athlete throughout the ordeal of the past two years, was equally thrilled at Powell's performance and the reception.

"This is absolutely huge for everyone that supported Asafa, to see him come back to this level. We knew he was in good shape. He ran a real nice time in Guadeloupe on a dead track and into a headwind, so we knew something special could happen," said Doyle, who, on Powell's behalf, has filed an US$8 million suit against the manufacturers of the supplement that contained the prohibited substance.

"You could hear from the crowd and you could almost feel his elation. With everything that he has been through, and we have all been through as a team, and for Jamaica to see one of their heroes go through what he had to go through, I think it lifted everybody," said a smiling Doyle.

Doyle thought the overwhelmingly positive reaction from the crowd was of greater significance than Powell becoming the first man to break 10 seconds this year.

"It didn't matter how the race went, once I heard the crowd when he was introduced and how happy the crowd was to see him, my night was made."