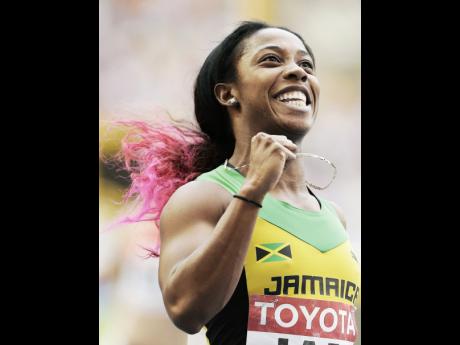 Shelly-Ann Fraser-Pryce may only be running one individual event in Beijing at the World Championships this August.

Speaking to the press at the Jamaica International Invitational last Saturday, Fraser-Pryce revealed that she hasn't yet decided to defend the 200-metre title she won in Moscow as the second part of a splendid 2013 World Championships sprint double.

She made the admission after placing third over 200 metres in a season's best time of 22.37 seconds at the Invitational.

That time was a massive improvement over the 22.96 clocking that gave her victory at the UTech Classic last month.

"This 200 was to execute, not how I executed that last one because I ran the corner a little too hard in the first one," she explained.

"So I came out a little bit slower than normal and to try to come off the corner as hard as possible," she said, outlining her approach to Saturday's race.

The winner was Bahamian Shaunae Miller in 22.14 seconds.

"I didn't win, but at the same time I'm really happy about the time because this time last year I wasn't running 22.3 this time," she said with a broad smile. "So I'm really excited."

Asked about areas she will work on to improve her 200-metre running, Fraser-Pryce replied: "You work on everything, especially when it comes to the 200, and considering the fact that I'm not sure I'm doing that event at the World Championships this year."

Though she is history's most successful 100-metre runner with two Olympic titles and two World Championships titles, Fraser-Pryce is a relative newcomer to big time 200m running.

She was second to American Allyson Felix at the 2012 Olympics in her major championship debut in the 200m. A year later, in Moscow, she was World champion.

Given the big improvement of her seasonal best from 22.96 to 22.37 seconds, her personal best of 22.09 might be under threat this year.

Like all reigning World champions, Fraser-Pryce has the IAAF wildcard selection to both the 100m and 200m, but the Stephen Francis-coached MVP Track Club sprint ace is taking the season on a step-by-step basis.

"I'm just taking it one race at a time," she concluded.

"It's going to be a competitive year," she said expectantly. "I'm looking forward to it."

She also revealed that she would run her first 100-metre race of the year next week at the Shanghai Diamond League meeting.