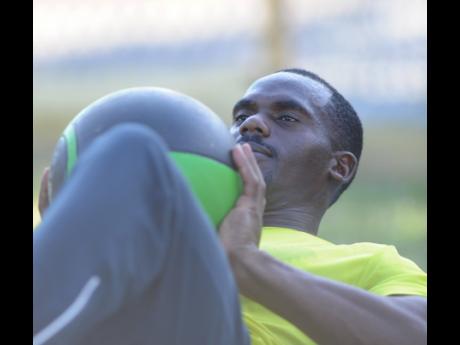 Ricardo Makyn
Sprinter Nesta Carter practises with a medicine ball during training at the University of Technology.

Carter ran third behind his former training partner Asafa Powell (9.84) and American Ryan Bailey (9.93) in Kingston, and will face a pretty strong field in the 100m here as well, with Trinidad and Tobago's Keston Bledman, who has already gone 9.94 this year, Mike Rodgers, Kim Collins, James Dasaolu and Justin Gatlin all expected to meet him at the start line.

The 29-year-old Jamaican is looking forward to the contest and knows all too well that it's races like these that will help him to meet his objectives for the season, which includes lowering his personal best of 9.78 - a time he believes he will need to better if he is to return to the medal podium at this summer's IAAF World Championships.

"Training has been going really well and I am going out there to execute and run my race. I love competing with a great field, so I do love the competition that will be here," Carter said yesterday, noting that he has been focusing on improving his pace in the final phase of his race.

"I would say the strongest part of my race is the start and the middle, while the weakest part would be the last 20 metres," Carter admitted. "I've been doing a few things differently, trying to improve on my finishing and I am looking forward to the World Championships."

Carter, who listed the Doha Diamond League among his favourite stops on the circuit, has been in the conversation for the 100m Diamond race in the past, and with the season getting under way in the Middle East city, the sprinter knows that a win here would put him on the right track.

"Definitely! That would be awesome! I've got my eyes on the prize!" said Carter, when asked if he has placed his cross hairs on the US$40,000 prize money and Diamond League title.

"I think my chances are very high also of lowering my personal best, knowing that I went under 10 seconds in just my first race. I also did a PB in the 400m, which means I will be stronger," said Carter.

"I think I would have to go under 9.80 to medal at the World Championships. It's going to be a very strong field so you have got to be fast!"