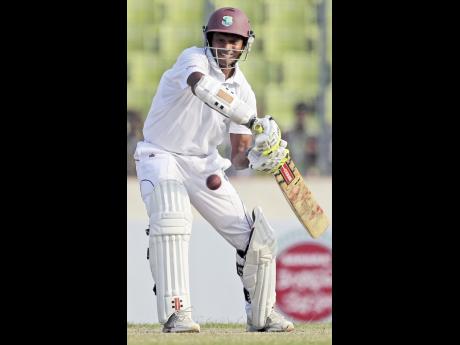 West Indies Cricket Board (WICB) president Dave Cameron said the public should know within days whether Shivnarine Chanderpaul has a future with the West Indies team.

The 40-year-old Chanderpaul, affectionately referred to as 'Tiger', is the second highest run-scorer in West Indies Test history with 11,867 runs - including 30 centuries - at an average of 51.37. However, in his last 11 innings, the Tiger has been toothless in scoring just 183 runs - 91 in five innings against South Africa and 92 in six against England.

He recently met with members of the Windies hierarchy to discuss his future with the team.

Cameron told The Gleaner yesterday he was unable to disclose how those discussions turned out.

"Unfortunately, I am not privy to the discussions, but obviously it is where he is at and what are the next steps," Cameron said. "In another couple of days it will be made a lot clearer as to the end result of those discussions or how we go forward."

Whatever is revealed in the coming days, Cameron believes Chanderpaul - who debuted for the West Indies on his home ground in Georgetown against England in March 1994 - should be honoured for what has been an outstanding career.

"I have never really liked how we have ushered out our players, so as president I am always trying to figure out how to honour them," he said. "We're doing it now on a continuous basis, year by year, for their performances, but at the end of a long and illustrious career like Shivnarine Chanderpaul's we want to ensure that whatever we do it is well respected and that he knows and the region knows how much we value his services to West Indies cricket."

Interestingly, Chanderpaul is one of four nominees for the award of Test Player of the Year at the WICB/WIPA Awards ceremony that will be held at the Jamaica Pegasus on June 6, 2015. The date for the awards and the respective categories were announced during a press conference at the Pegasus yesterday by West Indies Players Association (WIPA) president Wavell Hinds.

The nominee for WIPA's special Lifetime Achievement Award is former Jamaica wicketkeeper/batsman Renford Pinnock. The 77-year-old Pinnock played 44 matches for Jamaica, scoring 2,662 runs at an average of 40.33. He scored six hundreds, with a top score of 176 and 16 fifties.

Pinnock has also been an outstanding administrator.