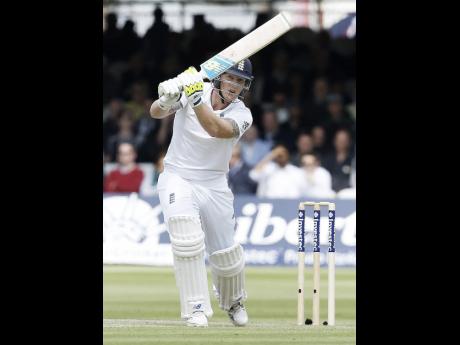 AP
England's Ben Stokes plays a shot off the bowling of New Zealand's Tim Southee during the first day of the first Test match at Lord's cricket ground in London, yesterday.

A stirring comeback by Joe Root and Ben Stokes pulled England out of dire straits against New Zealand on a compelling first day of the first cricket Test at Lord's yesterday.

Root and New Zealand-born Stokes, who came together at 30-4 after the first hour, combined for a rapid-fire 161, a remarkable riposte to New Zealand's opening salvo.

Their scores of 98 and 92, respectively, propped up England's impressive total of 354-7, which was impossible to fathom after the first hour.

New-ball pair Tim Southee and Trent Boult made the first strikes, and fellow fast bowler Matt Henry, on debut, picked up captain Alastair Cook and Ian Bell to put the hosts in deep trouble at 30-4 in the 13th over.

England were sent in by toss-winning New Zealand captain Brendon McCullum, and hunkered down in the face of relentlessly accurate seam and swing bowling on a green-tinged pitch in sunny conditions.

But in the next hour to lunch, England took the initiative from New Zealand by taking on the bowlers and the attacking field. Root and Stokes counterattacked, sharing the strike, running quickly, and scoring at ODI pace.

The three New Zealand pacemen began to lose their accuracy, perhaps because they haven't played a Test in five months, and Root and Stokes zoomed England to 113-4 by lunch. They were a tad more leisurely afterwards, though still pyrotechnic by Test standards.

Stokes, who scored a pair in his last Lord's Test against India in July, said there was no plan between him and Root other than to play their natural games.

"Everything went well for me today, but another day I could look like a wally and nick off for 20," Stokes said. "Good job I didn't."