Jamaicans aim to upset applecart in 200m at Prefontaine 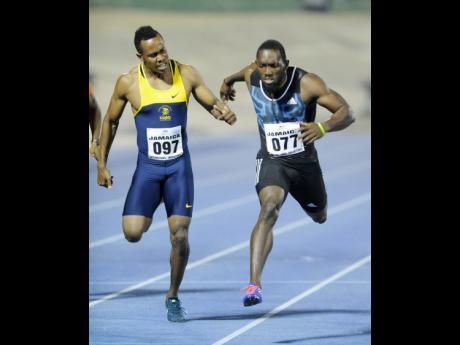 Ricardo Makyn
Julian Forte leans to the finish with winner Nickel Ashmeade (right) in the men’s 200 metres final at the Jamaica International Invitational at the National Stadium on Saturday, May 9.

UNDOUBTEDLY, Justin Gatlin is the hottest sprinting product among all males this year and the American will be hoping for another fast run when he competes in the men's 200 metres on Saturday at the Prefontaine Classic in Eugene, Oregon.

In Doha, in his first 100-metre race of the season, he produced a fantastic 9.74 seconds and he would also like to add another world leading time when he competes in the 200m.

With Usain Bolt idle last year, Gatlin was the man, as his 9.77 and 19.68 seconds were the fastest times over both distances last year.

It will be interesting to see if he is fully fit, as there were some concerns with injury at the Beijing Meet recently, where he did not compete.

Despite question signs surrounding him re the injury, he looks set to continue his winning ways here and it will be interesting to see what time he posts after seeing Bolt stop the clock at 20.13 seconds in Ostrava on Tuesday, the American will surely want to go much faster.

It should be a very close battle among the other athletes as three Jamaicans, led by Nickel Ashmeade, will also be among the starters. The others are Commonwealth 200 metres champion, Rasheed Dwyer, and the vastly improved Julian Forte. All three Jamaicans, along with Panamanian Alonso Edward, will be in a dogfight to finish in the top three.

In Shangai, it was Edward who came out on top as he held off a fast-finishing Forte for second, while Ashmeade had to settle for third, just ahead of Dwyer, who was fourth.

It will be interesting to see if the Jamaicans can get the better of Edward, with Ashmeade and Dwyer also looking to upstage Forte. After being beaten by him, victory now would surely give Ashmeade and Dwyer added motivation to do well and set the stage for a keen battle among the three for the rest of the season.