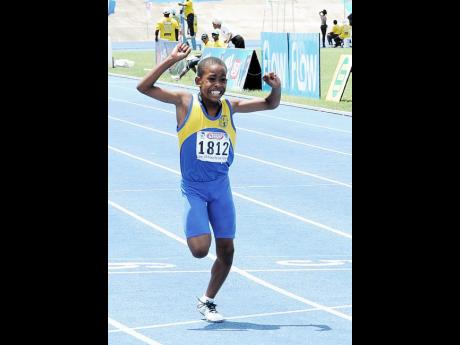 After winning the last of their 13 titles in the Jamaica Independent Schools' Association (JISA) Prep School Champs 17 years ago (1998), Vaz missed out on regaining the title last year losing by only five points to Hydel.

Vaz Prep won the inaugural staging of JISA Champs in 1977. However, they have gone off the boil in the past 17 years without a win and head coach of the team, Nicoy Robinson, is cautiously optimistic about their chance this year.

"The field events will have to play a valuable part for us. That area has to deliver because we are not as strong in the other areas as we were last year, so all hope will be on the field events this year in both classes One and Two," Robinson said.

The coach revealed that it is difficult to compete strongly against some of the other prep schools because of recruitment and the fact that they have big financial backing to fund their track and field programme.

"Once we are competing against that thing, then it is very hard for us to win Prep Champs, but anything is possible and we are not doubting ourselves."

Vaz Prep will have about 55 athletes representing them at Prep Champs. Their areas of strength are the sprint events and Robinson is looking to their Class Two boys to score the majority of their points.

"We are looking better in terms of team support from the parents, who are well supportive of the kids this year when compared to last year," he admitted.

Robinson also confirmed that the team chemistry is strong, mentioning that Jamaican-born 400m runner Sanya Richards-Ross, who represents the United States and is a past student of Vaz Prep, gave some invaluable advice to the kids and enlightened them about what is expected of them at all times.

He asserted that the team's preparation was smooth for the most part, except for the Class One athletes, who were getting ready for GSAT.