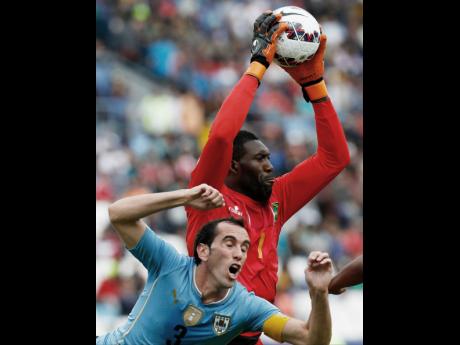 JAMAICA took an awfully long time to get going against Paraguay. And when they did, their effort ended up being too little too late.

The Reggae Boyz could not pull their way back after giving up a bizarre goal from a goalkeeping error and lost 1-0 in their Group B Copa America football match at Calvo y BascuÒ·n stadium yesterday evening.

The loss left Jamaica without a point and in a must-win game against Argentina to have any chance of advancing - as one of the two best third-placed teams - to the second round. Argentina beat Uruguay 1-0 on a Sergio Ag¸ero goal to move to four points, the same as Paraguay, who got three points from the win to add to the one they earned in a 2-2 first-match draw against Argentina.

Uruguay have three points and will battle Paraguay on Saturday, the same day Jamaica play the Argentines. The top two teams from the group automatically move onto the quarter-finals.

Edgar Benitez scored for Paraguay at the 36th minute, capitalising on a huge blunder from goalkeeper Duwayne Kerr.

Seeking to launch a counter, midfielder Victor Caceres, sitting midway his half, hit a long pass. The ball was overhit and Kerr shockingly raced from his goal area to meet the ball nearly 10 yards outside his box with a header directed straight at the forward.

Caceres reacted quickly by lifting his leg, the ball hit it, then rebounded over Kerr and beat the despairing chase of Kemar Lawrence into the empty goal.

"Two matches, no goals, you see where our problem is," said Jamaica's coach, Winfried Sch‰fer. "Against Uruguay, it was a set-play goal. We lost today to a crazy goal."

The manner of the goal may have been stunning, but the concession was not. That is because the Paraguay threat of a goal was loomed large from as early as minute four right up to the half-time interval.

Their strategy was simple and swift, always on the counter and mostly directed down Jamaica's left channel to their speedy and skilful No. 10 winger, Deris Gonzalez. He would generally knock back the ball to Roque Santa Cruz dropping off from centre forward, then take the return pass further down the flank and drill in the cross for their fast-arriving attackers.

Jamaica, with a deep-sitting defence, never adjusted well to that play at any point in the first half, even when the attacks were sent down the other flank from the play back, and Paraguay constantly created chances to score, with Santa Cruz heading once, then shooting straight at Kerr when unchallenged; and Raul Bobadilla and Nestor Ortigoza also drilling shots just wide.

With their central midfield combination changed from the opening game that they were unlucky to lose 1-0 against Uruguay, Jamaica were a step slower and found it difficult to establish any form of control.

"We've to move more to give options and move more for passes," Sch‰fer admitted. "In the first half, there were too many long balls."

Centre forward Darren Mattocks was the lone change to the starting eleven, with Giles Barnes shifted upfront, Simon Dawkins moved inside behind him, Garath McLeary staying right side and Jobi McAnuff moved to left midfield to clear space for Je-Vaughn Watson in central midfield, playing alongside captain Rodolph Austin.

Watson, the regular central pairing with Austin, had flown in from Dallas on the eve of the match and was a little flat in the opening salvo.

"Watson makes more pressure," Sch‰fer said of the energetic Dallas FC midfielder. "When Jobi's in, there's not too much."

Jamaica actually improved and took control of the match when McAnuff was withdrawn to central midfield following Watson's substitution, and Lance Laing, Deshorn Brown and Mattocks thrown into the fray. That dominance occurred for much of the last half-hour, with Jamaica controlling the tempo with far more accurate passing and measured play.