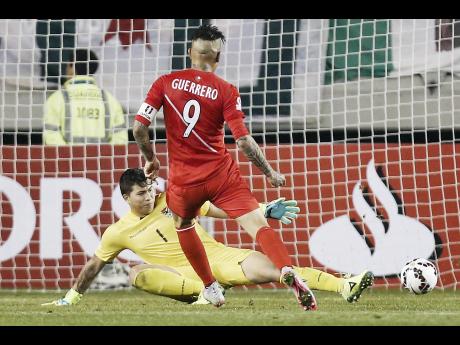 A Paolo Guerrero hat-trick led Peru to a 3-1 win against Bolivia on Thursday, securing a place in the semi-finals of the Copa America.

Peru attacked from the first minute, with Guerrero opening the scoring in the 20th minute when he headed in a perfectly placed cross from Juan Vargas. He added his second in the 23rd on the counterattack with Christian Cueva supplying the pass. He completed his hat-trick in the 74th after intercepting a pass.

Bolivia's Marcelo Moreno converted a penalty in the 84th.

The three goals were Guerrero's first after failing to score in the three group matches.

"We are showing that this team wants to move on, to improve, and we hope this will be the start, because we want to classify for the World Cup," Guerrero said.

Peru face hosts Chile on Monday in the semi-finals. On the other half of the draw, Argentina plays Colombia in a quarter-final on Friday, and Brazil faces Paraguay on Saturday in the other. The finals are July 4.

Peru went with an attacking line-up of Guerrero, Claudio Pizarro and Jefferson Farfan against Bolivia's stubborn defence, and could have scored at least two more goals in the first half.

Farfan had several chances, shooting just wide of the near post in the 37th and then hitting the crossbar in stoppage time.

Guerrero continued in the second half to shoot at every opportunity, with Marcelo Moreno also pressing to get Bolivia back into the match.

Farfan had the best chance early in the second half, shooting just wide of the far post in the 64th.