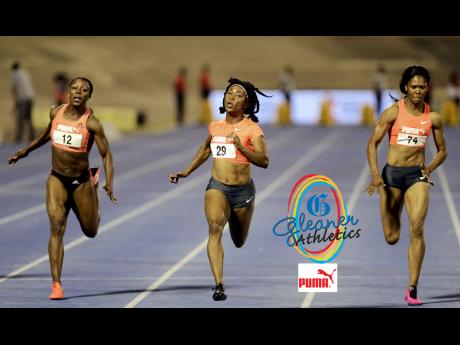 World champion Shelly-Ann Fraser-Pryce confirmed that she will be competing in the 200m today at the Jamaica Athletics Administrative Association (JAAA)/Supreme Ventures National Senior Championships at the National Stadium.

Fraser-Pryce raced to a joint world leading 10.79 seconds win in the women's 100m final last night to claim her third national title in the event ahead of training partner Natasha Morrison 11.03 and Veronica Campbell-Brown - the Diamond race winner, who clocked 11.06 for third.

"I am feeling good physically and I'm just looking forward to the rest of the championships and yes I am competing in the 200m," Fraser-Pryce said after her 100m win.

In the 200m, she will come up against her fast-rising stablemate Elaine Thompson, who was pulled from the 100m so she could focus on the half lap event.

Both athletes enter the championships with season best times of 22.37 seconds, making them the fastest Jamaicans in the event.