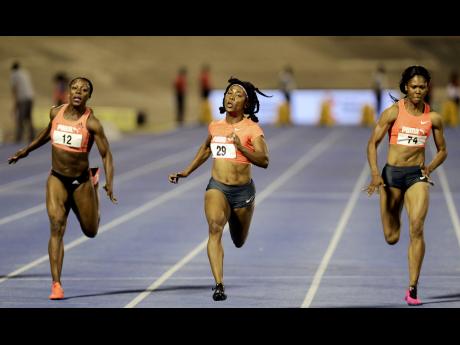 Shelly-Ann Fraser-Pryce (centre) taking the national women's 100-metre title in a world-leading 10.79 seconds at the National Stadium on Friday night. Natasha Morrison (right) was second in 11.03 and Veronica Campbell-Brown (left) third in 11.06.

STEPHEN FRANCIS, head coach of MVP track club, told The Sunday Gleaner yesterday that the decision for Elaine Thompson - his new sprinting sensation - to compete only in the 200 metres and not the 100m as well as the ongoing JAAA Supreme Ventures National Senior Championships, had everything to do with her preparation, and not avoiding a clash with World and Olympic champion, Shelly-Ann Fraser-Pryce, whom he also coaches.

Thompson, the second-fastest Jamaican this season with a personal best of 10.84 seconds last month at the Prefontaine Classic in Eugene, Oregon, was withdrawn from the women's 100m the day before the first round started.

"Not so," Francis said, when asked if Thompson was pulled to avoid a clash with Fraser-Pryce, who took the national 100-metre title, again, with a world-leading 10.79 seconds in Friday night's final.

"Elaine has been preparing for the 200 metres and at this stage of their career we do not let our sprinters do more than one event. We had to choose between the 100 and the 200 metres and we are very confident that she can win the 200 metres here and in Beijing; and if not this year then next year," Francis said during an interview yesterday morning at the National Stadium, while the 200m first round was in progress.

"Whenever Shelly is at her best everybody else runs below par and with Elaine concentrating on the 200 metres I think she can be more focused and can take down some big people in Beijing and this is also good preparation for her for next year," the coach continued in reference to the 2016 Olympic Games.

"She has been a bit shady with

her starts and has been struggling here and running the 200 metres would have been more beneficial for her. She is spending more time now in the gym getting stronger and this will definitely help her in improving on her starts," added Francis, about Thompson.

Francis said he wasn't surprised by Fraser-Pryce's time, given that she was out of competition for a few weeks due to a slight hamstring injury.

"Shelly is in great shape and this is only her third 100 metres for the season and I expect with more races during the summer and if she remains healthy she will get much faster and by the time Beijing comes around I expect her to run much faster than she did in winning on Friday," he said.

"Natasha really works hard in training and for her its work in progress. From the days at Glengoffe High she has been plagued with injury. After high school she took a year off due to hamstring injury and then last year she was pulled from the trials due to a knee injury. This year was started preparation a bit late because we decided to be more cautious with her as she has been up and down. We had expected her to run between 10.8 to 10.9 seconds on Friday, but as I said before, when Shelly is in a race in the form she is in everybody else tends to run slower," Francis explained.

"Hopefully when she runs without Shelly in the same race we will see the best from her and I expect her to have a good shot at the final at the World Championships," said Francis, who also stated that Fraser-Pryce will only run the 100 metres in Beijing.