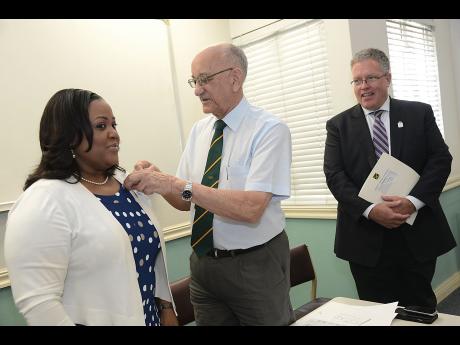 Sixty-five athletes and 28 officials were named by chef de mission Compton Rodney during a press briefing at the JOA head office on Cunningham Avenue.

"Our biggest team is in athletics, where 50 athletes were named. Odayne Richards has replaced Oshima Miller in the shot put event, although this arrangement is yet to be finalised," Rodney said. "The team includes Kerron Stewart, Simone Facey, Sherone Simpson, Leford Green, and Rasheed Dwyer, among others," he added.

"Jamaica has an enviable record of performances at these games, and we are looking forward to more success. The Games are undoubtedly going to be very, very good. There are more than 350,000 Jamaicans living in Toronto, so we expect good support there," Fennell said.

The JOA boss said the Games would continue to establish Brand Jamaica to the world.

"The strength of Brand Jamaica has been put together because of sports, and we want to continue that," he added.

Natalie Neita-Headley, the minister with responsibility for sports, also has high expectations.

"Once again, we expect to shine at these Games," she said.

"I expect great things in Toronto. I know they are going to make Jamaica proud. I want to remind the athletes that your best is what we want," Neita-Headley, who will attend the Games, said.

Canadian High Commissioner Robert Ready said his country is looking forward to hosting the Pan Am Games for the third time.

"I am very pleased to be here this morning to witness the naming of the Jamaica team. Canada looks forward to hosting the event. I want to wish the Jamaican team all the best. We know what Jamaica brings, so compete at your best and enjoy Canada," Ready said.