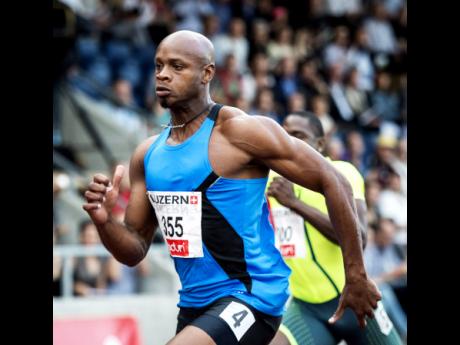 Heavy is the head that wears the crown they say, but Asafa Powell doesn't seem to mind at all - he wants the crown!

With question marks surrounding sprint king Usain Bolt and an army of Americans led by Justin Gatlin ready to storm the throne at next month's IAAF World Championships, in Beijing, Powell, thinks he's the man that will defend Jamaica's seven-year sprinting reign in the Chinese capital.

Jamaicans have stood atop the medal podium in the men's 100m and 200m at every major senior international championship since the 2008 Beijing Olympic Games.

Blake missed out on making Jamaica's team to the World Championships after just returning from a lengthy injury layoff, while Bolt on Wednesday pulled out of the Paris and Lausanne Diamond League meets after reporting that he has been struggling in training due to an injury.

Its ironic that it's now Powell, who has a long injury rap sheet himself, who at this point is looking like the island's best hope heading into Beijing.

It's a challenge that Powell seems to be relishing as he gears up for a 100m showdown against the likes of Nesta Carter, Mike Rodgers, and Jimmy Vicaut at tomorrow's Meeting Areva Paris Diamond League, which in some ways serves as a dress rehearsal for his real test - next week's clash with Gatlin and Tyson Gay in Lausanne.

"Honestly, I think I'm the (country's) best chance heading into Beijing at this point," Powell offered during a sit-down interview with The Gleaner at the Mercure Paris Centre Hotel. "I don't know what's going on with Usain (Bolt) for instance, but all the other (Jamaican) athletes would have to do something extraordinary for me to consider them to be going to China to compete for the gold medal in the 100m, so definitely, I would say I am the one to carry the flag, and I am ready to bear that burden of protecting the winning streak."

Criticised in the past for not living up to expectations when it mattered and lacking the confidence and drive of his rivals, Powell has been preaching a new sermon these days.

"I have been in the sport for a very long time and a lot of persons have doubted me over the years, but I still remain strong and focused and continue to put in the work. I am one of the athletes who has remained consistent for a very long time, and people don't always give credit for that, but to be back on top is a great feeling," Powell added.

Only Gatlin has gone faster than Powell this year, with the Jamaican twice dropping 9.84 this season, while remaining unbeaten in his eight starts to date. The last time Powell went unbeaten in his first eight races of the season was in 2010.

"People overlook a lot of things and consistency is one of the main things. Not many athletes have been in the sport for over 10 years and have managed to stay on top with the other big guys," Powell argued.

Thing is, can he end the season as THE big guy? The Jamaican is certainly taking heart from the start that he has had this year.

"The season has been going according to plan. I have been running well in these first few track meets and I think I would have gone faster if the conditions were great in all races," said Powell, whose 9.84 win in Jamaica last week was his fastest time ever at the National Senior Championships.

"I ran 9.84 with a bad start, and you know that I am normally a great starter, so to be running from the back and end up running 9.84 is really good for me, so once I correct my start, I should be able to take my time below 9.8 seconds and go even faster," Powell reasoned.

Bolt’s celebrity continues to pay off for Puma
Showdown in Lausanne
DIAMOND DEBATE - Asafa, Gatlin or Gay?
9.84 is Asafa's magic time
No sweat for Safa