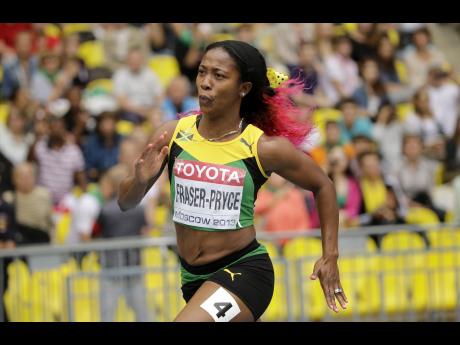 It's been six years since a woman posted a 100m time below 10.70 seconds and only three women have ever gone below that mark in history.

It is that lack of special times and a 'wow' factor that, according to leading female sprinter, Shelly-Ann Fraser-Pryce, has caused women in the event to struggle for the kind of attention that their male counterparts enjoy.

Fraser-Pryce will be looking to bring that spark this season, making no secret of her ambition to take her personal best from 10.70 to the 10.6 realm and after a eye-popping 10.79 in her last outing, the speedy Jamaican will be looking to test the clock at today's Meeting Areva IAAF Diamond League at the Stade de France in Paris.

The triple world champion is one of 10 Jamaicans down to compete at the meet and will come up against an eager field in the women's 100m with co-world leader English Gardener (USA) and fellow fast steppers Blessing Okagbare (Nigeria), Murielle Ahoure (Ivory Coast), Dafne Schippers (Netherlands) and upcoming Jamaican Natasha Morrison also ready to run fast.

Sign up for The Gleaner’s morning and evening newsletters.
Shelly-Ann Fraser-Pryce

"I have always said it's a man's world. I think females are sexy and attractive and when we line up to run, we look good and we run fast. But, for some strange reason people are more excited about watching the men run," Fraser-Pryce said ahead of today's competition.

The sprinter confirmed that she will not be defending her 200m world title in Beijing next month and has instead decided along with her coach Stephen Francis, to focus on the shorter sprint in an effort to improve her performances there. She did, however, add that she may return to the 100m - 200m double for next year's Olympic Games.

"I won't double in Beijing," Fraser-Pryce said. "I will only do the 100m. It was a decision that was taken by my coach last year that we will opt to do just the 100m this year in order to focus on getting back to where I was in 2008."

For now, she focuses on holding off a determined pack of women in what should be a cracking 100m, which gets under way at 1:52 p.m. (Jamaica time).