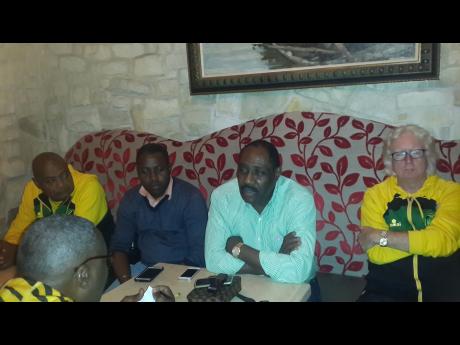 HAWTHORNE, California:
Neither the Jamaica Football Federation (JFF) nor its players will face any consequences for the latter’s refusal to train as scheduled at the StubHub football facility, in preparation for their opening Group B match in the CONCACAF Gold Cup tomorrow evening.

However, JFF boss, Captain Horace Burrell – while commending the team for backing down - said the repercussions would have been ‘severe’ if there was no resolution to the crisis of their inability to settle the Reggae Boyz’ demands for more money to play the tournament.

READ: 'All has been settled' - Captain Burrell

“I commend the players for the good sense that prevailed because there would have been sanctions all round to the players, to the federation and our football development on a whole. But I continue to say all is well that ends well and good sense prevailed on the part of the players and they will be getting back to work tomorrow.”

Burrell also said neither the JFF nor the Boyz will face any sanctions for the strike action.

“As a member of the CONCACAF executive I did what I thought was necessary. I advised my colleagues in CONCACAF as to what was happening. I kept them up to date and I gave them a thorough briefing. They understood and I will advise them that the matter has been settled and come tomorrow it will be business as usual,” he told members of the Jamaica media in an early morning press conference, that followed hours of negotiations with the players.

He added: “It’s still pre-tournament and there are not going to be any consequences at this time. The tournament commences on Wednesday for Jamaica and therefore we still have time to get things in place and to get ready for the game.”

The Reggae Boyz, here to participate in the CONCACAF Gold Cup, did not train yesterday evening as scheduled, as they stuck to their demands for more money to play in the tournament.