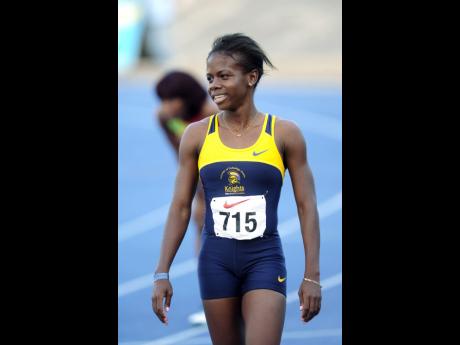 For those who were not blessed with presence at or watched the coverage of the Beijing World Championships Trials a weekend ago, meet one of Jamaica's finest, Megan Simmonds.

This columnist was first made acutely aware of this pint-sized St Andrew High School sprint hurdler when she was assigned, a few seasons ago, to deliver the traditional message on behalf of the female athletes, at the opening ceremony at the Carifta Games.

That prominent platform produced an effervescent, exciting, ever-smiling miss, popping pleasure and pride at representing her country on a regional stage.

It can be no secret in Jamaica's track and field arena that Michelle Freeman and Delloreen Ennis (later married, London), formerly of St Jago High School and two of the nation's elite female sprint hurdlers, were like family to this journalist. They were introduced by well-known members of the sporting fraternity, for a "little assistance" to buttress their innate talent.

A canopy of support and mentorship for young, mostly female athletes was established. In a brighter economic climate then, the resultant goodwill far exceeded the proposed intent.

There developed a firm understanding, supported by live viewing of the ups and downs (pun intended) that brand the career of a hurdler. Both ladies had gold medals ripped from their grasp by falling to the ground while in full race flight. Freeman was showing her heels to the eventual gold medalist Julie Baumann, when she plunged to the ground at the final barrier during the 60m hurdles final at the 1993 World Indoor Championships in Toronto. This was preceded by a similar mishap, in the 100m hurdles second round at the 1992 Barcelona Olympics, while bearing down on the undisputed queen of USA hurdling of the era, Gail Devers. Devers herself faltered in the final when seeming a clear winner, placing third as she stumbled across the line.

With 100m hurdles gold at the Worlds in Edmonton, 2001, a distinct probability, Delloreen had her prospects dashed when, at the Paris Grand Prix weeks before, she ended her season and threatened her career. An anterior cruciate ligament (ACL) injury saw her out of action when ahead of a quality field.

With this background in sprint hurdling disasters, embracing these particular athletes, the Megan Simmonds Beijing Trials experience struck a familiar chord. Like the mentioned pair, her reaction was potently positive and impressively inspirational. Remorse placed on hold, the outward show revealed a strength of character and fortitude of spirit that befitted champions in the making.

The former St Jago High School ladies, after the incident, had risen to their feet and held both hands aloft, as if in triumph.

If fate has its way, what befell our little Megan, when she was prepped for higher service in Beijing, could be the mapping out of future brilliance. She believes in the power of the Almighty to see and correct, that which the mortal man may deem to be hopeless. Her motivational posts on social media are a message to encourage the weak of heart to mount a strong and strident engagement with forces of destruction.

Now, where did all this mental fortitude originate, this willingness to take on and triumph over the monster that reared its ugly head at hurdle nine in her semi-final race on Sunday, June 28? Foster's Fairplay turned to the traditional genesis of faith in self and the ability to conquer all, in a path to success in any endeavour.

Mummy Marva was prepared, accentuating the confidence that is instilled in her daughter.

"We believe in and serve the Living God, so we accept that all things work together for good to those who love him." To her, Megan, in the face of disappointment, did not surprise. She added, "She is a trooper, isn't she?" As Jamaica saw on that Sunday evening, this is a very special athlete.

How much so, only time has the answer.