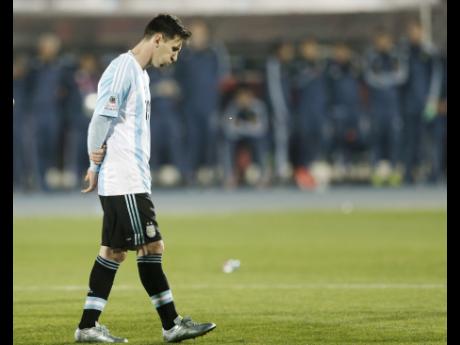 Another flop by football superstar Lionel Messi at another big international tournament has set the debates swirling again as to his place on the list of the all-time greatest players.

This issue of Messi's relative greatness is much less complicated than it's been made out to be. The man is simply brilliant for his club Barcelona, and by comparison, he is absolutely ordinary for his country Argentina.

Claims of Messi being the greatest ever can in no way be credible until Messi himself addresses that anomaly. With that out the window, we need to now objectively slot Messi where he properly belongs. That task in and of itself poses a unique challenge in that the little Argentine maestro is so marauding, dominant, superior and unstoppable at the club level, while relative to his talent and skill levels and in comparison to his club performances, he is so inexplicably poor at the international level.

At the moment, Messi can go no higher than fourth on that greatest-ever list. Pele, Diego Maradona, and Zinadine Zidane are ahead of him simply because they not only won the major titles, but because they performed consistently better than Messi at the international level, when it mattered most.

Only Messi to blame

These arguments, of course, lack credibility and basically represent drowning men and women clutching at straws while being overwhelmed in the ocean of international failure by Lionel Messi. The sad reality for them remains, their candidate for the greatest player of all time is yet to win a single title at the full international level. That is a position that cannot be credibly defended.

Whenever the stakes get higher and the pressure increases, Messi in that Argentina shirt has a well-documented history of disappearing. He did it in the World Cup in 2014 playing 120 minutes of football in the World Cup final and went missing in action. He turned up at the Copa America in Chile and disappeared again for another 120 minutes in the championship game.

What Messi's legion of fanatics refuse to accept is that, in situations like these, truly great players use their superior talent and skill levels to find ways to win. Players like Pele, Maradona, Zidane, Ronaldo de Lima (Brazil) etc would never play 240 minutes of football without finding a way to win. That's why their greatness is indisputable.

What throws Messi's greatness even further into question is the widespread and spot on notion that he would never play 240 minutes for Barcelona in two important club finals and disappear each time.

He is unable to conjure up the tenacity, will, and toughness to do what great players do PERFORM AT HIS BEST when it matters most. That is why the level of his greatness is being legitimately questioned. Messi invariably crumbles into obscurity on these big occasions. That is what he did again in Copa America 2015. While he remains the greatest club player ever, with his lengthening list of international failures, his place on the greatest of all time list is yet to be secured.