Powell vows to give his best 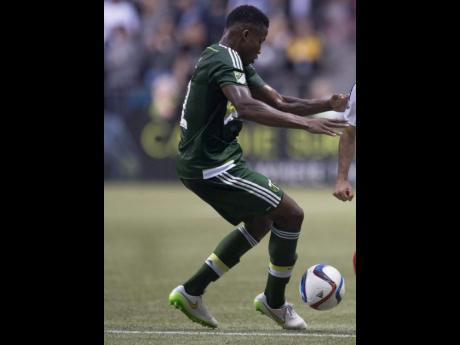 WHEN it comes to representing, Reggae Boy defender Alvas Powell knows only one way. He has to leave it all on the pitch.

For the CONCACAF Gold Cup, the 20-year-old is looking to do nothing but that for Jamaica.

"As long as I get my chance, I'm going to give it my best, the same way like how I'm giving it my best at my club, because only your best is good enough," Powell emphasised.

" You've to listen to your coach and teammates on the field. For me, you've to keep working hard each day, and anytime I get my chance, I'm going to go hard."

Hard, he could, as early as tomorrow, when Jamaica opens its campaign with a match against Costa Rica at Los Angeles' Stub Hub (formerly Home Depot Center).

Powell joined the Jamaica team yesterday from his MLS club, Portland Timbers, where he has played 19 matches this season.

He is keen to get involved, especially as he wasn't included in the recent Copa America tournament, where Jamaica lost first-round matches 1-0 against giants Argentina, the world No. 3 and beaten World Cup and Copa finalists; Uruguay, the world No. 8; and Paraguay, which had lost in the previous South America championship match to Uruguay..

Powell was not released for Copa because clubs are only obligated to release players for FIFA competitions that fall within their confederation.

"When I heard that I was not going to the Copa America, it was disappointing, but now I've got the chance to play in the Gold Cup, I'm pretty excited and looking forward to this tournament," he admitted.

"We're pretty confident. Watching the Copa America, it was an outstanding performance from all the players, and from that angle, it has brought some energy and determination, that focus to the Gold Cup, and I think we will do well."

While there, he got drafted in the national Under-17, Under-20 and senior representation, while also playing at Portmore United. Initially, the former Premier League champions loaned him to Portland in 2013, before the club etched a full-time deal this season. Now, he is looking to draw from what he has learnt in the MLS to help the Jamaica team.

"Now in Portland, I'm getting a lot of games playing against some big players, experienced players, and I'm learning a lot from them," said Powell.

"We needed the experience in the team ... so playing against Kaka, all of those players, they're calm, so it's just the simple things. The most important thing is to listen to your teammates and work hard for each and every game," he pointed out.