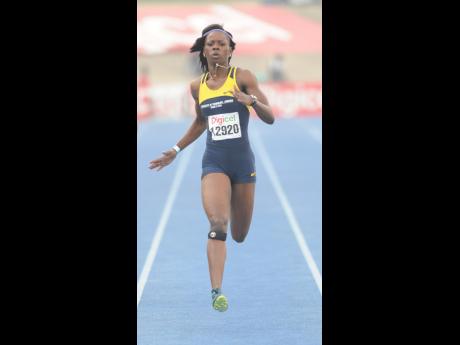 Shericka Jackson didn't win the women's 400 at the recent National Senior Championships, but her performance there impressed many. Improving at the University of Technology, Jackson produced three personal bests en route to second place. It was a performance that would have pleased her former Vere Technical High coach, the late Constantine Haughton.

Christine Day won in 50.16 seconds, with Jackson edging past Commonwealth champion Stephenie McPherson near the end. For the third time in three races, Jackson set a personal best, and finished the final in 50.34 seconds. She left her old lifetime mark of 51.32 in the dust with clock stoppers of 51.01 in the first round and 50.65 in the semi-final.

Coached now by Stephen Francis, the former Vere Technical star had been ushered towards the 400 metres by Haughton. However, because of her prowess at 200 metres, it wasn't easy to convince her. Haughton nurtured dozens of Olympians while he was at Vere, and in his last interview, he said, "That's one of the real problems I'm having, trying to get her to really recognise her real ability in the 400 metres because she can do so well in the 200m."

Jackson, who turns 21 next week, has an impressive turn of speed. She was the final-leg runner of Vere's quick 4x100 metre teams and, in addition to numerous Girls Championship and Carifta Games 200m titles, reached the 2012 World Junior 200 final. In fact, her 2013 Carifta Games runner-up time of 22.84 seconds is the second-fastest ever by a Jamaican junior athlete.

In the 200m, she raced to five gold medals at Champs and two at Carifta.

Despite coach Haughton's misgivings, she was almost equally successful at 400 metres with three wins at Champs and two at Carifta. On top of all that, she set a fine personal best of 51.60 seconds at the 2013 renewal of Champs.

This year, she maintained her speed and clocked 22.89 seconds in the 200m. Given her cautious opening 200m in the 400 metre final at the Nationals, the 50 second barrier beckons. If she breaks the barrier, she will join Lorraine Fenton, Shericka Williams, Grace Jackson, Novlene Williams-Mills, Sandie Richards, Rosemarie Whyte, and McPherson in an elite group of Jamaicans who have gone that fast for 400 metres. If she does it this year at the World Championships in Beijing, it could put her close to the medals there.

This season, only the American pair of Francena McCorory and Sanya Richards-Ross have sub-50 second times, at 49.85 and 49.95, respectively.