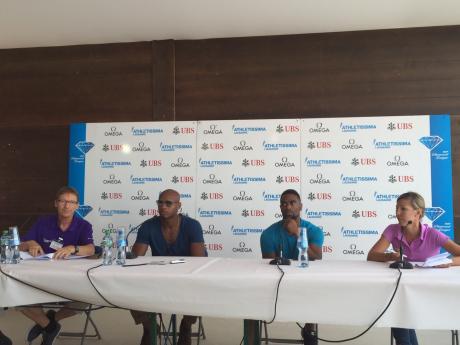 Andre Lowe
Asafa Powell: "I don’t know who you guys think he (Gatlin) is, he is like the fifth fastest man in the world so I don’t know why you think he can’t be beaten." Powell was addressing a press conference at which Tyson Gay was also present.

Former world 100m record holder Asafa Powell was in a confident mood as he addressed journalists in Lausanne ahead of tomorrow’s mega 100m clash against world leader Justin Gatlin and Tyson Gay.

Powell, who is responsible for three of the six fastest times in the 100m this season with a best of 9.81, will square off with Gatlin, who has gone as fast as 9.74 and Gay, 9.87, but the Jamaican seems undaunted by what will be the biggest test of his unbeaten season so far.

“I don’t know who you guys think he (Gatlin) is, he is like the fifth fastest man in the world so I don’t know why you think he can’t be beaten,” said Powell when asked about his chances against the sprinter who has now gone unbeaten in 19 100m races. “I have been running quite well this season and running very fast so for tomorrow I expect to run fast just the same.”

“I want to surprise myself… I’m going out there to make everyone proud of me,” added Powell.

“This is what people pay to see, over the years they always see us compete at the World Championships together but not on the circuit so its good to have a few runs before the big one,” added Powell.

“As a top sprinter you have to stay on your ‘A ‘game because anything can happen,” Gay added. “Hopefully we can put on a show.”

Gatlin was absent from the press conference as he is only scheduled to arrive in Lausanne today after competing in Budapest on Tuesday.