Gayle calls for support ahead of academy graduation 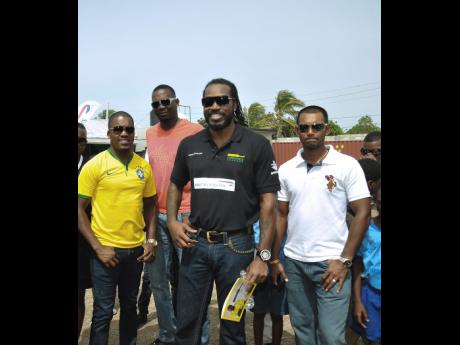 Encouraged by his academy's first year of work and give back, former West Indies skipper and captain of the Jamaica Tallawahs, Chris Gayle, says he will be looking to assist more disadvantaged youths and nurture and expose cricket talents who could ultimately go on to represent national and regional cricket teams.

The big-hitting batsman is imploring Jamaicans to support his humanitarian cause.

The Chris Gayle Foundation will tonight host an official graduation exercise and fundraising dinner at The Jamaica Pegasus hotel, beginning at 6 p.m.

It will also include a special auction of iconic memorabilia from past and present West Indian cricketers such as Sir Vivian Richards, Sir Garfield Sobers, Michael Holding, Dwayne Bravo and Gayle.

"I am truly excited and proud of the success of the Academy so far. It has taken a lot of hard work," Gayle said.

"This is something I am committed to, and I will continue to work with these and other youngsters, as it will help them to excel and be great citizens of our great country," he explained, while thanking persons and companies who assisted and supported during the year.

One of those organisations includes Cricket for Change, a British-based organisation which has worked to develop coaching, development and programming skills of the youngsters. It also helped to create the Chris Gayle Foundation website last year.

Twenty young men, aged 16-22, were brought under the tutelage of the Lucas Cricket Club-based foundation, which meets Wednesdays and Saturdays each week.

It provides cricket gear and handbooks for the youngsters, along with transportation, lunch and hydration at each meeting time.

Three young men have since been selected to the Jamaica Under-17 cricket team and two for the Under-19 team.

Besides cricket, the youngsters are taught mathematics, English, etiquette and lectures on the history of West Indies cricket at the University of the West Indies, Mona.

Academy director, Radcliffe Haynes described the past year as "great".

Meanwhile, academy member Javian McFarlane said: "The academy has benefited me in many ways. It has enhanced my cricketing skills tremendously."