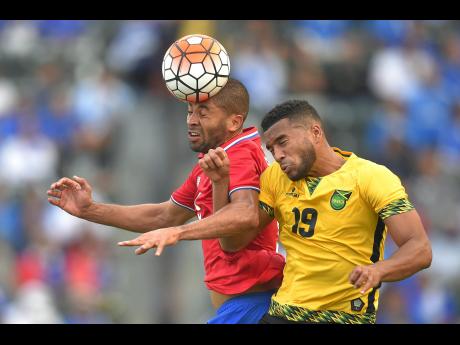 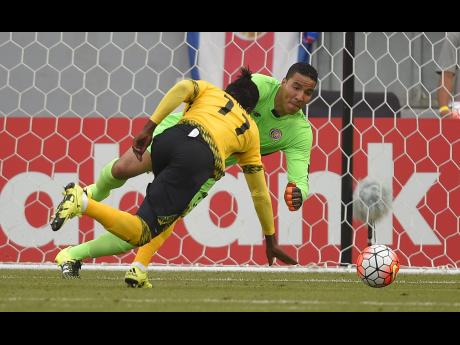 CARSON, California:
JAMAICA battled back bravely after giving up an early lead, to secure an exciting 2-2 draw with Costa Rica in their opening Group B match of the CONCACAF Gold Cup at StubHub Center in California on Wednesday evening.
Both teams have one point the four-team zone, with two certain to qualify for the quarter-finals. Jamaica will next play on Saturday in Texas against Canada, who were engaged in the group’s late match at the same venue against El Salvador.
Garath McCleary (13th) and Joel (Jobi) McAnuff scored for Jamaica, while Costa Rica’s conversions came from Roy Miller (33rd) and what appeared to be an own goal by central defender West Morgan that was credited to David Ramirez (37th).
Rodolph Austin, the Jamaica captain, was voted Man of the Match, while his central midfield partner, Je-Vaughn Watson, was outstanding, but had one blemish when picking up the team's only yellow card.
“It was a good start, Costa Rica is not a small team, Costa Rica were one of the top teams at the World Cup,” said Jamaica’s coach, Winfried Schafer. “Congratulation to our players.
“I’m happy my team made two goals today, I’m happy for the point, but I want to win.”
With Jamaica’s first chance, McCleary scored the game’s opening goal from a long throw-in by Kemar Lawrence. The ball bounced once, a defender missed an attempted clearance and McCleary at the far post side-footed the ball firmly on goal. The ball took a deflection and went the other side of goalkeeper Esteban Alvarado.
Costa Rica equalised after finding a slight opening when central defender Wes Morgan was called for a foul against Bryan Ruiz moving away from the Jamaica goal area on the left side of the pitch with his back to goal.
The Central Americans made full use of the opening to equalise, crafting a cleverly worked free-kick when Ruiz played a diagonal grounded pass to David Ramirez on the right side of the penalty area. Ramirez played a one-time cross and Miller headed past the Jamaican goalkeeper.
“The free-kick was a very good idea,” Schafer analysed. “But the defence went to sleep.”
Costa Rica were energised with the goal. Jamaica appeared to lose their composure after the goal and the Costa Ricans capitalised four minutes later when a long diagonal pass floated over Morgan’s head to Ramirez, who lobbed goalkeeper Miller. Morgan recovered and appeared to have got to the ball before it had crossed the goalline. However, his attempted clearance rifled into the roof of the net, handing Los Ticos a lead they held until half-time.
Jamaica raced out of the blocks in the second half and levelled the scoreline through a magnificent solo goal by McAnuff.
The midfielder won the ball in the arc and dribbled past four opponents as he sliced his way through the middle of the pitch and into the penalty box, where he shot low past the advancing goalie at the 48th minute.
“The goal by Jobi McAnuff, he’s 33 years, wow!” Schafer exclaimed. “That was a great goal because it came from his heart.”
For the remainder of the game, it was a wide open affair with end to end action. The Reggae Boyz played with a lot more expression and got chances on several occasions to win the game.
Substitute Mattocks turned a defender for a one-on-one chance that was saved by the keeper at the 64th minute; McCleary shot on a defender after a four-on-two counter left Coata Rica exposed, with Mattocks and Lance Laing unmarked at the far post. Then after some excellent work by McCleary on the right, he laid back a pass for Dawkins, who hit one-time, only to see Alvarado make another brilliant save diving to his right to deflect the ball for a corner in the 89th minute.
“When I see the chances in the second half I think we’ve to win,” Schafer admitted. “The goalkeeper made some saves ... sometimes you need luck.”