It's Uncle Taf's time to shine 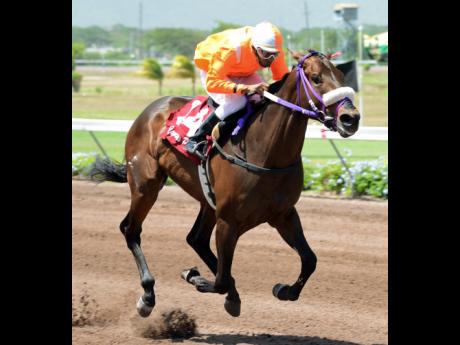 UNCLE TAF, one of the most versatile and consistent horses in overnight and open allowance company, should come into his own and win the eighth race for overnight horses over the straight five course, at Caymanas Park today.

Trained and part-owned by Solomon Sharpe, UNCLE TAF was highly fancied at 8-5 to win the Ren Gonzalves Memorial Cup, 2000 metres, June 28, but was beaten into third place by 3-2 favourite FRANFIELD.

UNCLE TAF lost second on the wire to ROYAL VIBES, after leading for the first half of the race he stumbled when challenged and passed by FRANFIELD at the half mile.

Though yet to win in five starts this season, the five-y-o gelding has been pretty consistent over varied distances in open and overnight allowance.

UNCLE TAF was a fast-finishing second to CRUCIAL APPEAL(beaten 1-1/4 lengths) behind a fast 57.1 in a tough open allowance race, February 21. On June 13, he failed by three-quarter length to catch RIO COBRE at 1100 metres in overnight company.

He can expect worthwhile opposition from SUNLIGHT EXPRESSS, AMICABLE, SCOOP JORDYNE and particularly the American three-year-old colt SUPERIOR QUALITY, up in class after his recent win in restricted company. However, UNCLE TAF should have the beating of overnight allowance and gets the vote in a nine-strong field. Title-chasing jockey Shane Ellis replaces Ameth Robles, a plus in the gelding's favour.

Elsewhere on the nine-race programme, Pick-9 players should get off the mark with the very fit COUNTRY TRAIN in the opening race over the round-five course for $350,000 - $300,000 claimers.

She failed in her bid for the hat-trick on a $245,000 claiming tag on June 13, finishing fifth to out-of-class CLASSY PROSPECT, but actually chased the winner to the last furlong.

Now dropped in class and the trip ideal, COUNTRY TRAIN, with improving apprentice Sadiki Blake aboard, should lead home her five opponents.

Take AUNT HILDA to win the second race at 1100 metres, COME DANCE WITH ME in the fifth, ROUGH PATRICK (working well) in the sixth and CRY OF THE POOR to upset the likely favourite, PHALAENOPSIS, in the nightpan.