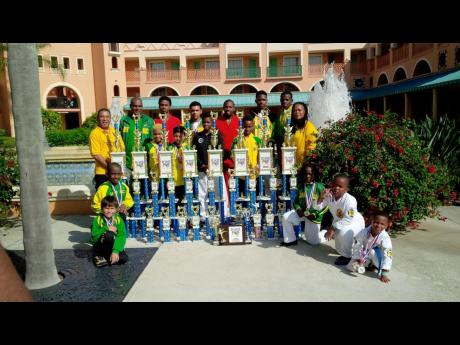 Veterans among the 60-odd-member contingent of Jamaican participants at the annual event, Campbell and Edwards' students accounted for 44 of 86 medals won. Jamaica reaped 33 gold, 22 silver and 31 bronze medals at the July 2-4 tournament.

Ningen and Rising Sun's juniors numbered among the many young Jamaican students, ranging from university to junior schools, who accounted for the bulk of medals won, joining Kingston and Ultimate tae kwon do schools, as well as Seido Karate's lone representative, Greagon Taylor.

"It's a good exposure for students, especially the younger ones," said Campbell, whose students won nine gold, two silver and 10 bronze.

"At local tournaments, it's good, but it's different here where they face martial artists from all over the world," she added.

Whereas Edwards did not compete this year, Campbell was impressive in her event, traditional forms, winning bronze in the 40-and-over division.

Ningen's Scott Wright was the most successful Jamaican adult black belt at the tournament with three gold medals. He collected his first in the three-man team-fighting event, won by the island's combined martial arts team.

The Ningen fighter returned to bag -169lb titles in continuous and clash sparring as Ningen ended with five gold, one silver and six bronze.

"This was attempted 30 years ago by Errol Lyn," he said. "We are coming from the days when we were at tournaments, we didn't even look at each other. We have certainly come a far way."