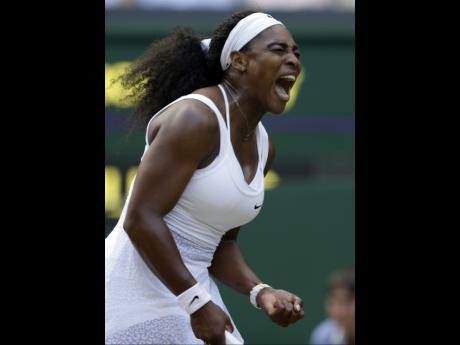 AP
Serena Williams of the United States celebrates winning a point against Victoria Azarenka of Belarus during their quarter-final singles match at Wimbledon yesterday.

Even as Serena Williams piled up aces and groundstroke winners from all angles, even as she stormed through seven games in a row and 10 of the last 13 in yet another comeback, her Wimbledon quarterfinal against Victoria Azarenka never felt like a runaway.

That's because Azarenka, a two-time major champion and former No. 1 in her own right, was playing spectacular tennis, too, nearly the equal of Williams in every facet.

For when Williams finds her best game, she becomes unbeatable. And for her past 26 Grand Slam matches she is, indeed, unbeaten. Erasing an early deficit at centre court, Williams got past Azarenka 3-6, 6-2, 6-3 yesterday with the help of 17 aces and a remarkable ratio of 46 winners to 12 unforced errors.

"It's been up and down, up and down, but somehow I'm still alive. I don't know how," said Williams, who twice was two points from losing to Britain's Heather Watson in the third round and is now 14-0 in three-setters and 37-1 overall in 2015. "So we'll see what happens, but I'm just happy to still be here."

She is closing in on a fourth consecutive major title for a self-styled Serena Slam, which she already accomplished in 2002-03. Pull that off, and Williams also will have the third leg of a calendar-year Grand Slam and go to the US Open with a chance to become the first player since Steffi Graf in 1988 to win all four major trophies in one season.

Williams is 17-2 against Sharapova, including 16 straight victories. But one of Sharapova's wins came at Wimbledon, in the 2004 final, when at age 17 she stunned Williams for the first of her five Grand Slam titles.

The other semi-final is No. 13 Agnieszka Radwanska of Poland against No. 20 Garbine Muguruza of Spain.