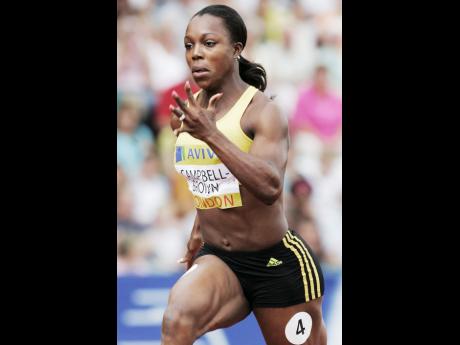 Sprinting titan Veronica Campbell-Brown dipped below 11 seconds for the first time this season, while upcoming sprinter Elaine Thompson picked up another win as Jamaica's athletes continued their preparations for the World Championships.

Running into a headwind of -1.2 mps at the Gyulai Istvan Memorial in Budapest, Hungary, Campbell-Brown shot out of the starting blocks and held the lead to the end, stopping the clock at 10.99 seconds to finish ahead of American Tianna Bartoletta, 11.18 and Carina Horn of South Africa, 11.19.

Shevon Stoddart, who finished second in the 400m hurdles at the National Championships was sixth here, crossing the line in 56.06 as Georganne Moline (USA), 54.60 took the event ahead of fellow American Cassandra Tate, 55.06 and Hanna Titimets of Ukraine, who posted 55.61.

Also in Budapest, there was bad news for national 110m hurdles champion Omar McLeod, who competing in his first race as a professional, stopped short around the fourth hurdle after leading the pack, which included world leader Orlando Ortega - who also failed to finish the race, as Russian Sergey Shubenkov took advantage, winning in 13.27 into a -1.9 headwind.

Jason Richardson was second in 13.35 with Aries Merritt taking fourth in 13.40.

At the Meeting Internazionale di Atletica Leggera in Lignano, Italy, Elaine Thompson, competing in the 100m, led a Jamaican one-two, winning in 11.11 (-1.2) ahead of Natasha Morrison, 11.32 and Italian Jessica Paoletta, 11.69. Christania Williams was third in 11.70.