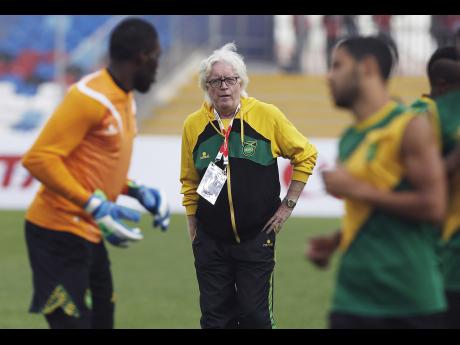 Jamaica's Reggae Boyz got the evening off on Thursday as they look to rest, then prepare for Saturday's Group B CONCACAF Gold Cup football match against Canada.

The Jamaica team got little time to rest after Wednesday night's opening group match against Costa Rica at StubHub Center in California, which ended 2-2.

They watched most of the other group match that followed between Canada and El Salvador - which ended 0-0 - and returned to the team hotel near 11:30 p.m. Thursday morning, they had to rise for an 11 a.m. departure to the airport and jetted off on a two-hour, 40-minute flight to the US midwest state on a charter with Canada, the team they will tackle on Saturday.

Given the hectic schedule, Winfried Schafer, coach of the Reggae Boyz, said ice baths, stretches and rest would be key.

"We've to make a good recovery," said Schafer, after the team arrived at the hotel base in Houston close to 6:30 p.m.

"Canada are very fit, everybody can run for 100 minutes," he observed of the North Americans.

"The ball must run," the 65-year-old coach outlined of their play. "We have good players, we've better football players, now we've to be the better team, we've to play intelligent."

Additionally, Schafer wants his goalkeeper to take control of his area.

"The goalkeeper is boss, this is my area," he said of the attitude he wants Dwayne Miller to adapt.

Though he said the goalie was not at fault for the goals, Schafer wants Miller to talk strongly, take command and instill fear in a manner similar to Oliver Kahn, the former no-nonsense German goalie of the 1990 World Cup champions.

"The opponent must be afraid, like Oliver Kahn," said Schafer, himself a German, who won the Bundesliga title as a player. "I want more confidence, more body language, more talk."

Schafer was also not pleased with how his team defended the set play that led to Costa Rica's opening goal, saying they should exhibit greater awareness.

"We've to smell good plays," said Schafer, noting that based on the position of the players over the ball, it was clear none of the two were going to shoot directly on goal.

As it turned out, the ball was played along the ground to the other side of the penalty area, then floated back to the far post and Costa Rica's Roy Miller met it unchallenged to score past his namesake on the Jamaica team.

"It was a good start, Costa Rica are not a small team, Costa Rica were one of the top teams at the World Cup," said Schafer. "I'm happy for the point, but I want to win."