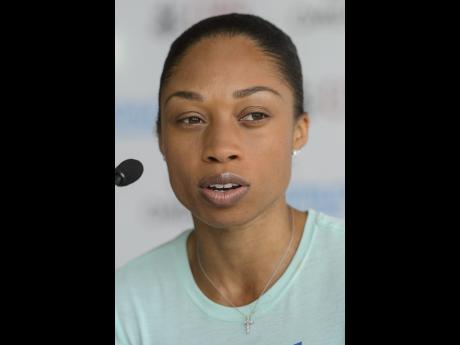 It seems unlikely that American sprinter Allyson Felix will attempt a 200m-400m double at next month's IAAF World Championships in Beijing, China.

Felix told reporters yesterday that a final decision may come after her 200m run at today's Lausanne Diamond League meet.

The sprinter, who has the option after securing a 200m wildcard as last year's Diamond League winner in the event while her 400m spot came after her win at the US Outdoor Nationals, did, however, indicate yesterday that she will not be attempting the double this year, amid suggestions she might in an attempt to encourage organisers of next year's Olympics to be more facilitating of the 400m/200m attempt, in their scheduling.

The women's 200m semi-finals and women's 400m final are just 70 minutes apart at the World Championships.

"I hope that, moving forward, the Olympic schedule will reflect that but at this World Championships, in my opinion, I don't see it as being ideal to run optimal in both the 400m and 200m," added Felix who also shared that her coach Bobby Kersee will be lobbying officials to improve the flexibility of the schedule for next year's Olympics.

Felix said that Kersee would also decide whether she runs in the 200m or the 400m next month, a decision that will in many ways be based on her performance today.

No woman has ever registered a 200m-400m sweep at the World Championships, but it has been done at the Olympics in both genders.

Michael Johnson won gold in both events at the 1996 Olympic Games the same year that Marie Jose-Perec claimed the female double.

Before them, American Valerie Brisco-Hooks took the double at the 1984 Olympic Games.