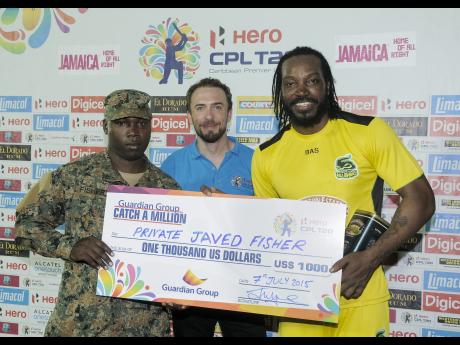 Contributed
Private Javed Fisher of the Jamaica Defence Force (left) receives the Catch a Million cheque from Chris Gayle (right) of Jamaica Tallawahs and James Wynne of the Caribbean Premier League at the end of the match between Jamaica Tallawahs and St Lucia Zouks at Sabina Park on Tuesday night.<\n>

Private Javed Fisher of the Jamaica Defence Force is US$1,000 richer, thanks to the Hero Caribbean Premier League's (CPL) Catch a Million promotion, in association with Guardian Group.

Fisher, a fast bowler with the JDF Cricket Club, caught a Chadwick Walton six one-handed at Sabina Park during Tuesday night's match between the Appleton Estate Jamaica Tallawahs and St Lucia Zouks. As well as winning US$1,000, Private Fisher also has the chance to win a trip to Trinidad for the Hero CPL final, and if he repeats the feat at the Queen's Park Oval, he will win US$1 million!

Damien O'Donohoe, chief executive officer, Hero CPL, said: "We've had a lot of near misses, so it's great to have a successful one-handed catch in the crowd. We're delighted for Private Fisher - you can tell he's a good cricketer because he made the catch look so easy."

Larry Olton, Group VP, Integrated Marketing Communications, Guardian Group, said: "Last night's (Tuesday) match between the Tallawahs and Zouks presented multiple exciting opportunities for a spectator to take a US$1,000 catch, and Guardian Group congratulates Private Fisher and wishes him the best of luck as we move to the final in Trinidad and the chance to win up to US$1million."

The first person to take a catch one-handed at every CPL match this year will win US$1,000. The public will vote on the best catches online at CPL's official Facebook page (https://www.facebook.com/CarnivalT20) to decide who makes the trip to Trinidad.

There have been 198 sixes in the tournament so far, and there are bound to be many more opportunities for fans at the upcoming matches in Jamaica, St Kitts and Nevis, Guyana and Trinidad and Tobago to win.