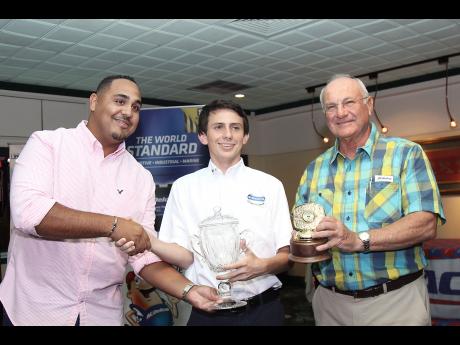 He is the ACDelco National Shotgun Champion for the first time, outgunning 10-time champion Ian Banks and the four-time champion Shaun Barnes.

Cheers, salutes and applause went Sasso's way as he collected several trophies, the main one being the JC Thwaites Cup for emerging overall champion.

"I have a good amount of trophies... maybe 10. I'm happy to be the 2015 ACDelco champion as I definitely feel my hard work has paid off," he told The Gleaner.

"Ever since the NCB tournament, I have been practising a lot more. It feels great to beat Shaun Barnes, we are both competing for the top, but we remain good friends and look to grow in the sport," he stressed.

Next up for Sasso is bird shooting next August, then to the US National Championships in Texas.

Speaking at Wednesday's banquet and awards ceremony, Jamaica Skeet Club president, Khaleel Azan, reflected on gains made by the organisation in its 50-year existence.

Those, he said include, "growth in competitions and participating numbers, exposure of the sport across the media landscape and increased sponsorship".

"I want to say thanks to everybody on that journey of trying to get it right. We have a great managing committee, and we have fantastic members and staff," he underlined