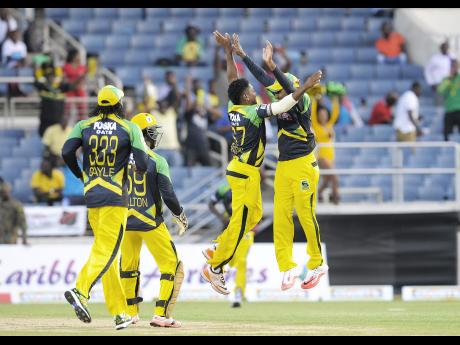 Jamaica Tallawahs pace bowler, Krishmar Santokie, believes staying focused will be a key ingredient if the team is to get the better of Trinidad and Tobago Red Steel in their Caribbean Premier League Twenty20 encounter at Sabina Park tonight. Match time 6 p.m.

"It's always good to win your first game at home, and set a momentum. So, the next step for us is try and maintain it," said Santokie, who on Tuesday helped the Tallawahs beat St Lucia Zouks by nine wickets at the same venue.

"Trinidad, as always, should be tough opposition, as they always have good players, but we know what we are capable of doing.

"We just have to remain focused, get the ball in the right areas when we bowl, and when we bat be positive throughout."

The Tallawahs, in their pursuit of a fourth win, will be hoping for another top bowling performance from Santokie, who was their best bowler against the Zouks.

The 30-year-old claimed two for 29 off his allotted four overs, including the wickets of in-form openers, Johnson Charles and Andre Fletcher, in his opening spell of three overs.

Opener Chris Gayle who scored an unbeaten 64 against the Zouks and his partner, wicketkeeper Chadwick Walton, who top scored with 76, will again be hoping to lay a solid platform.

Trinidad, in the meanwhile, are set to bank on the Bravo brothers, Dwayne and Darren, and South African great Jacques Kallis, as well as spinners Sulieman Benn and Samuel Badree.

Fourth in the six-team standings on six points, the Tallawahs who have played five games, will enter the contest looking to leapfrog third place St Kitts and Nevis Patriots.

The latter have the same amount of points as the Tallawahs, but a superior net run rate.

Trinidad, having played three matches, are currently occupying the second-from-bottom position with three points having notched a win, a loss and a no-result.