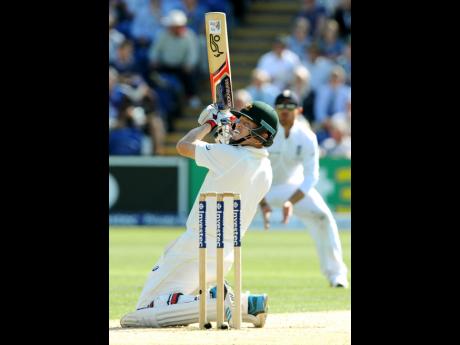 In the morning, the last three England wickets netted an invaluable 87 runs to lift the total to 430 all out. England then dug out Australia's top order in less than two sessions on the passive pitch, and slowed down the visitors to 264-5 at stumps, still 166 in the red.

Australia opener Chris Rogers agreed: "We can't concede a big deficit, otherwise it's going to be a big uphill battle for us. We have to get closer."

At the crease were Shane Watson on 29, and nightwatchman Nathan Lyon on six.

Rogers looked set to blow away England by featuring in 50-plus partnerships for the first three wickets.

The Australian with the most experience in English conditions, Rogers, who turns 38 next month and playing his last series, effortlessly picked gaps, defended safely, attacked the short ball, and tucked away balls off his legs.

After lunch, he became the fifth batsman, and first opener, to score seven consecutive Test 50s. The previous six scores were last December-January at home against India.

By stumps, Ali had 2-67, and played his part in putting the brakes on the Australians. He was not surprised.

"In this series, both of us spinners (including Australia's Nathan Lyon) are going to be attacked quite a bit, and we are going to get wickets," Ali said.