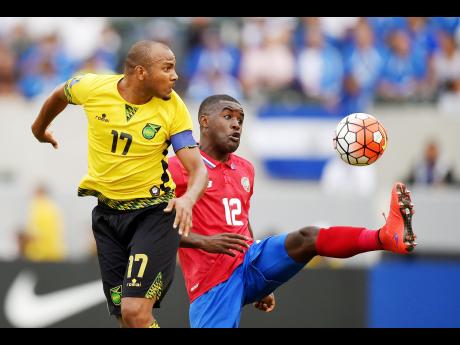 AP
Jamaica's Rodolph Austin (left) and Costa Rica's Joel Campbell battle for the ball during the second half of a CONCACAF Gold Cup in Carson, California on Wednesday. The match ended in a 2-2 tie.

THOUGH he doesn't mind the result, Reggae Boyz captain Rodolph Austin is happy the team is creating chances and credited his teammates for their fightback in Wednesday night's 2-2 draw with Costa Rica in their opening match of the CONCACAF Gold Cup at StubHub Center.

"It is always disappointing when you don't put away the chances, but at the same time, the players are trying to score, and we're getting the chances," Austin outlined after the Group B contest.

The Caribbean champions got chances aplenty to win against world number 14 Costa Rica in Wednesday's game.

"If we weren't getting the chances, there'd be other things to blame. But the team is playing well and we'll be looking to continue like that," Austin noted.

Garath McCleary (13th) and Joel (Jobi) McAnuff scored for Jamaica, while Costa Rica's conversions came from Roy Miller (33rd) and what appeared to be an own goal by central defender West Morgan that was credited to David Ramirez (37th).

"At the end of the day, we're satisfied with the point, but we could have won the game. We went ahead and we didn't take it. But we showed good character; we fought back and got a point."

Costa Rica took the lead with goals four minutes apart, a period in which Austin believes the team lost focus.

"I think we switched off, and at this level, we've to be more focused," he observed. "It's disappointing the way we're conceding goals at this moment. But once we can work on that, we'll be good. No team is outplaying us. That's very good. We just have to switch on at all times."

The Jamaica team, however, fought back in the second half and drew level with a magnificent solo goal from McAnuff, who won the ball in the centre arc and dribbled through the heart of the Costa Rican midfield past four defenders on his way to scoring from near the penalty area.

Austin believes though Costa Rica moved the ball well, Jamaica "showed them too much respect" in the first half. He says a change in attitude was reason for their comeback and heaped praise on his teammates.

"In the second half, we went at them and we dominated the second half," he said. "We're showing character and the camaraderie in the team is great, the vibe is right, and everyone is happy. Each player knows what they're supposed to do and it's very positive going forward."

From a personal standpoint, the hard-working midfielder, once again, was voted Man of the Match. Still, he believes he could have done more, only had he not been limited by cramps.

"To be honest, I think I could've done better. I was playing more defensive today, I was getting cramps in the second half, but I played through it and kept it simple," he admitted.

"To be honest, I think it's the best two teams in the group, so that's good," he added of the result. "But we're a bit disappointed we didn't get the three points."