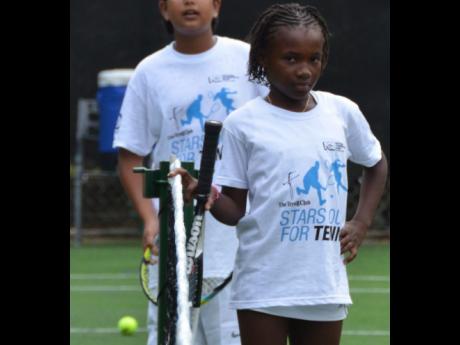 Five days of fierce competition between the top young players in Jamaica was seen at the Access All Jamaica (AJ) 2015 Junior tournament, which took place from Wednesday, July 1 to Sunday, July 5, on the recently resurfaced Eric Bell Tennis Centre courts, at Piccadilly Road in Kingston. Competition was in five age groups, ranging from 10 and Under to 18 and Under, for boys and girls.

The tournament was run by Tennis Jamaica, and Access Financial Services was the title sponsors. Hi-Lyte sports drink and KingAlarm were the associate sponsors.

Top honours in the boys section went to 16-year-old Hillel Academy student Brandon Tom, seeded No. 5 at the start of the competition, who was crowned champion after disposing of three higher-seeded players. First, he defeated the No. 4 seed Daniel Hill in a match that saw a very close first set which ended 6-4, then a second set blowout 6-0.

Next up for him was defending champion Kyle Martin, and things did not look good at first, as Martin won easily at 6-0. Tom's game improved in the second set that was very close, and he eventually went on to win 7-6. He maintained his momentum in the third set and played smart tennis to take the set 6-3.

There was more work to be done, however, and, in the finals, he came up against the steady Cliff Dyer, seeded No. 2. He won the first set easily 6-1, but Dwyer played much better in the second and at one stage looked like taking it to three sets. He made too many unforced errors at crucial stages of the game, however, and bowed out 7-5.

Thirteen-year-old Emma Dibbs from Immaculate High School was crowned champion in the Girls 18 and Under when her opponent Selena Blythe had to default. Earlier in the day, Blythe had a hard match in the 16 and Under final against Jenna Harrison, who beat her 6-1, 6-3, and did not recover enough to play in the higher age group final.