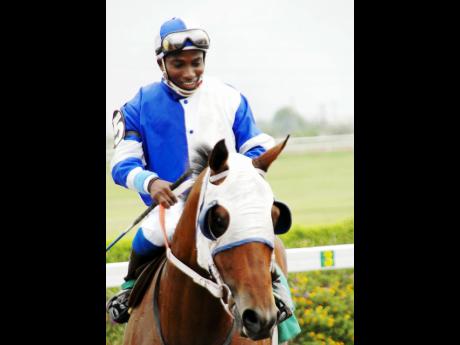 Former champion jockey Wesley 'Callaloo' Henry resumes riding at Caymanas Park tomorrow after a three-year absence, securing as many as seven rides on the 10-race programme.

A 1996 graduate of the Jockeys' School along with Shane Ellis and Richard Mitchell, Henry won the jockeys' championship in only his second season as an apprentice in 1997 and to date has ridden more than 500 winners locally.

Henry has ridden extensively on the North American circuit over the past 10 years, notably at Belmont Park and Aqueduct in New York and Calder and Gulfstream in Florida. He recently returned home following an extended riding stint in Florida and has teamed up with top local agent, Gary 'Glasses' Reid, who up until recently was the long-time agent for four-time champion jockey Omar Walker.

Reid will be booking rides for Henry for the first time and says he is looking forward to a fruitful partnership with the experienced lightweight rider.

Prior to Henry, Reid has worked with five jockeys, including Paul 'Country' Francis, Winston 'Fanna' Griffiths and of course, Walker.