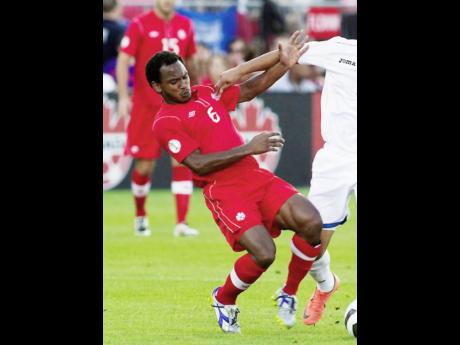 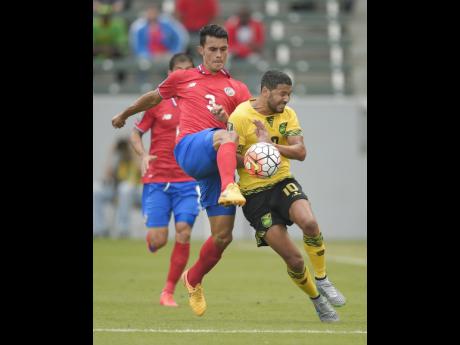 AP
Jamaica's Joel McAnuff (right) in a tussle for possession with Costa Rica's Giancarlo Gonzalez during the first half of their CONCACAF Gold Cup match on Wednesday in Carson, California. The game ended in a 2-2 draw. 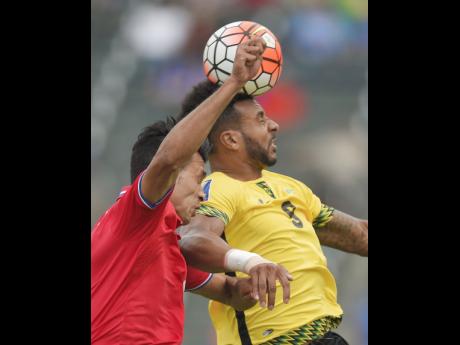 THE BIG V is the target when Jamaica tackle Canada in their second Group B CONCACAF Gold Cup football match, at BBVA Compass Stadium at 5:30 p.m. today.

It is the first match of a group double-header, with Costa Rica battling El Salvador in an all Central American feature at 8 p.m.

All the teams are tied with one point following Wednesday's opening fixtures at StubHub Center in Los Angeles, where Jamaica and Costa Rica played to a 2-2 draw and Canada and El Salvador finished goalless.

However, Jamaica and Costa Rica are the leaders - by way of superior goal difference - in the hunt for the group's two top positions and automatic qualification to the second round.

With three groups of four and eight to move on, the best two third place countries are also guaranteed knockout competition.

For today's match-up, the head coach of the Jamaica team, Winfried Schäfer, is intent on securing nothing but victory.

"We need four points, then we have a chance to go into the next round."

Getting past the group stage is also the goal of Canada, which won the tournament in 2000.

"Our objective is clear - to get out of the group. The team believes it can do that," admitted Julian de Guzman, the former Deportivo del La Coruna La Liga player. "The rest of the tournament is a gamble."

The countries have met on 12 occasions with Canada, ranked 103rd by FIFA, marginally ahead on the scoreboard with five wins. Jamaica have won four of the matches. Most of Jamaica's successes have come in World Cup Qualification, where they lost once to Canada, but won three of the six meetings.

"Canada are very fit, everybody can run for 100 minutes," Schäfer observed. "Canada are compact, they fight and they have a good striker. It will be difficult."

The good striker he mentions is strong frontman Cyle Larin, who held up the ball well against El Salvador, but had one breakaway miss - a number-one bloops and blunders contender - when he rounded the goalie and put the ball over the open goal. Tousaint Ricketts, a key midfielder with Jamaican roots, is another of their influential players.

When in possession, the 65-year-old coach said for Jamaica "the ball must run".

"We have good players, we've better football players, now we've to be the better team, we've to play intelligent," continued Schäfer, who will field the same starting team.

"When we lose the ball we've to run behind and make no mistake in the midfield. From free-kicks and corners we've to make a goal."

Schäfer has pointed repeatedly to the dangers of set plays in international football. His defence will have to take careful note of that fact and try its best to limit free kicks around its penalty box, as ironically, one by Wes Morgan led to a goal by Costa Rica.

The Reggae Boyz must also look to capitalise at the other point of play, where a long throw-in and a magnificent solo run produced goals for Garath McCleary and Jobi McAnuff.

Besides finishing, those players were instrumental in key attacking moments that produced scoring chances against Costa Rica, in tandem with Giles Barnes, Simon Dawkins, Darren Mattocks off the bench and Je-Vaughn Watson. Schäfer wants the same.

Like Jamaica, Canada's team is stacked with professionals. However, their skill level is not the same. But they have been awkward opponents for the Boyz, who scored the one real lopsided win, a 3-0 thumping in 2008 World Cup qualifying in Kingston.

Canada were quite porous against El Salvador Wednesday night and Schäfer's team could flourish with precise finishing.

Last time they met, Canada made almost a similar scoreline, 3-1 in a friendly at BMO Field in Toronto on September 9, 2014, when Kemar Lawrence's goal had the scores tied at half-time.

Canada though, are not taking any plaudits from that, especially in light of the much changed complement of Jamaica's team and their strong showing against world number one Argentina, Uruguay and Paraguay at Copa America last month in Chile, in matches they lost 1-0.

"I think Jamaica are a very good team. I think it's at a superior level to us because many of the players are playing overseas," observed the North American team's Spanish head coach, Benito Floro.

Despite his observations of Jamaica - whose ranking dropped from 65th to 76th after Copa - Floro believes in his team.

"We are confident we can offer a good fight," said Floro. "I think Canada can win."

"That was a friendly game ... completely two different teams from that game to now," said de Guzman.

"It's a different, higher expectation going into this game, so Jamaica will be tougher."