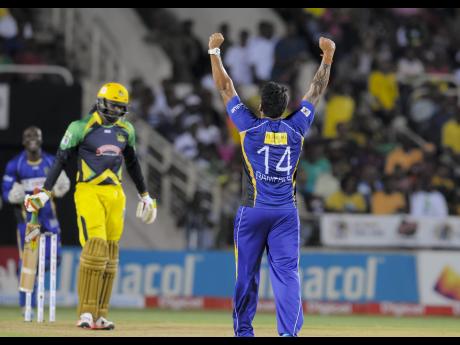 Jamaica Tallawahs slumped to their first defeat at home in the Hero Caribbean Premier League Twenty20 after going down by 17 runs to Barbados Tridents at Sabina Park on Saturday night.

Leading the way for the Tridents was their captain Kieron Pollard, who topscored with 59, and took two crucial catches, that of Sri Lankan Mahela Jayawardene and all-rounder Andre Russell.

"It was a good victory, we really worked hard for it," said Pollard.

"We would have loved a bit more than 146, but this is cricket, and we knew the power of scoreboard pressure.

"It was therefore good to see our bowlers get stuck in and get the job done."

Jamaica, who were hoping to leapfrog the Tridents into first place, got off to a shaky start in their run-chase after losing their first four wickets for 18 runs inside six overs.

Influential opener Chris Gayle went caught at cover off the bowling of Ravi Rampaul for 14 off 11 balls before South African left-arm spinner Robin Peterson wreaked havoc in the fifth over with three wickets.

The first was hard-hitting Australian batsman Chris Lynn, who played on to his stumps off Peterson's first delivery for 13.

The out-of-form Mahela Jayawardene was then caught at bat pad by Pollard off the first ball he faced for zero.

The third victim was Jermaine Blackwood, who was bowled.

Chadwick Walton was joined by the Nkrumah Bonner and together they put on 67 for the fifth wicket.

However, with boundaries hard to come by, and the required run-rate climbing, it left the lower order batsmen with too much to do.

They needed 34 runs off the last three overs, 24 off the last two, and 22 off the final, and at no point looked as if they would have got them.

Bonner, who struggled to hit boundaries despite being the set batsman, ended not out on 31 off 36 balls, including one four and one six.

Peterson finished with three for 13 off three overs, and Jason Holder, two for 36.
"That Peterson over is where we lost it," said Gayle.

"We had to consolidate thereafter and it did not take place, especially with Russell being injured."

The result pushed Barbados to 10 points, while Jamaica, in second position, remained on eight points.

The Tallawahs will on Sunday play Guyana Amazon Warriors in their final home encounter.

"It would be good to win at least three of four games at home, so come on Sunday against the Warriors we hope to correct things," Gayle added.