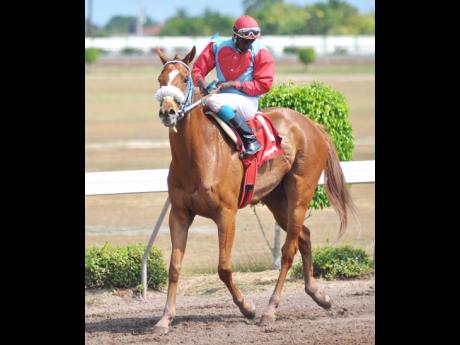 Jermaine Barnaby
FORTUNEONEHUNDRED ... to lead all the way in Reggae Trophy feature.

Grade one horses hold centre stage at Caymanas Park today in the annual renewal of the Reggae Trophy for three-year-olds and up over the straight five course to be contested by six starters.

Included in the small field is last year's winner UPPA TUNE, a versatile and consistent American six-year-old horse from the in-form stables of Harry Parsard; CRUCIAL APPEAL who won the Lady Geeta Trophy over 1200 metres ahead of UPPA TUNE on April 18 and the speedy American five-year-old gelding FORTUNEONEHUNDRED.

Completing the field are the recent winners TRADITIONAL PRINCE and RIO COBRE, both up in class and extremely fit, as well as PETE'SWILDONE, who was second to stable-companion UPPA TUNE in this race last year.

So all six runners are in good nick and should ensure a highly competitive race, especially top contenders CRUCIAL APPEAL, FORTUNEONEHUNDRED and UPPA TUNE, who shoulders topweight of 57.0kg with Paul Francis aboard.

Strictly at the weights, the Wayne DaCosta-trained FORTUNEONEHUNDRED looks tempting from the convenient mark of 52.5kg and will more than likely hold rivals at bay under title-chasing jockey Robert Halledeen.

FORTUNEONEHUNDRED ran a blinder in defeat on May 23 when failing by a neck to stave off champion sprinter POTCHEEN in the Lotto Sprint Trophy over 1100 metres, a race in which he had both UPPA TUNE and CRUCIAL APPEAL behind.

True, he could only manage seventh to stable-companion HOVER CRAFT n his subsequent race over 1800 metres for the Viceroy Trophy on June 27, but found the distance out of his depth after leading at a cracking pace for most of the way.

Back over an ideal trip, FORTUNEONEHUNDRED should take a lot of catching. Fit and rearing to go, he should stave off UPPA TUNE and CRUCIAL APPEAL in the final rush.

Other firm fancies on the card are HOUDINI'S MAGIC in the third, RAISING THE BAR to make all the running in the fourth for maiden fillies, WILD NATIVE in the sixth and in the eighth race for the Ossie Steele Memorial Cup, down in class FILL'S FANCY to stave off recent winner MISS JUANITA in a field of 10.