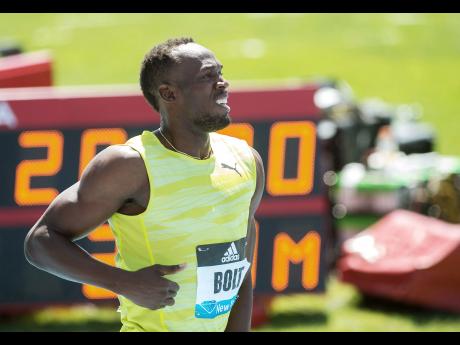 Usain Bolt will return to London's Olympic Stadium to run the 100 metres at a Diamond League meet later this month.

The announcement yesterday came after a left leg injury led to the Jamaican sprinter withdrawing from races in Paris last month and Lausanne on Thursday.

Bolt will race in London on July 24, three years after winning three Olympic gold medals in the Olympic Stadium in the 100-, 200- and 4x100-metre relay races.

The announcement about Bolt's participation came two days after British treasury chief, George Osborne, decided that foreign athletes would not be taxed on the earnings while in London for the two-day Anniversary Games meet.

"I have great memories of competing in the Olympic Stadium in the summer of 2012 and in the previous Grand Prix meets in London," the 100- and 200-metre record holder said in a statement. "The British fans are always great and I expect there will also be a lot of Jamaican fans in the stadium.

"It will be amazing to put on another great show for them under the floodlights on the Friday night."

Since Bolt last competed at the Olympic Stadium, at the first Anniversary Games in 2013, the venue has been redeveloped to accommodate English Premier League club West Ham from 2016 while retaining track and field facilities.