No ease up, says Gayle 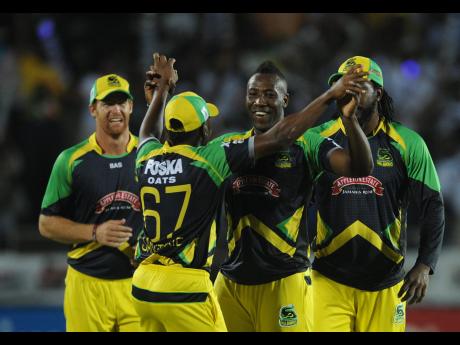 Ahead of key clashes against Barbados Tridents and Guyana Amazon Warriors, respectively, this weekend, Jamaica Tallawahs captain, Chris Gayle, promises no let up and remains confident his team will remain unbeaten at home in the Hero Caribbean Premier League (CPL) tournament.

The matches will take place today and tomorrow at Sabina Park.

"It is our home and we have to stamp our authority and let them know that we are number one in our home town," said a jubilant Gayle after his team defeated Trinidad and Tobago Red Steel on Thursday night.

He scored 105 from 57 balls, even as other middle order batsmen failed to get going.

"That's one of the reasons why we played an extra batsman. Anyone of those guys can get a big score and get a bit of confidence and get the job done," he said.

"As I have mentioned in team meetings, we are all match winners," Gayle added.

Meanwhile, coach Junior Bennett said the plan is to win everything at home.

"We have to maximise our home effort as most of the teams have done well in most of their home matches," he told The Gleaner.

Today at 6 p.m. Tallawahs will play Barbados Tridents at Sabina Park while returning tomorrow at 4 p.m. to lock horns with the Guyana Amazon Warriors.

With crucial points at stake, Jamaica Tallawahs will no doubt be looking to win all remaining matches, which would see them skyrocket to first or second on the Hero Caribbean Premier League table.