Richards-Ross will never give up 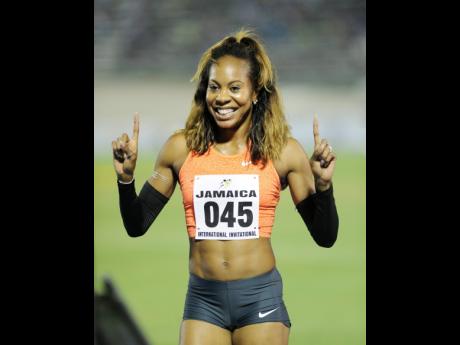 In her first race after crashing out of the US Outdoor Championships at the semi-final stage and missing the chance to compete at next month's World Championships, Sanya Richards-Ross crossed the line in second place, but for her, the result on Thursday was hardly the most important thing here.

"Getting back on track and competing was the most important thing for me after the disappointment of not making the team," Richard-Ross told The Gleaner. "Getting out there and running again; keep on racing - it was tough for me out there though."

"It was tough, but I'm happy that I ran fairly well today," she added.

Richards-Ross posted 51.12 to finish behind Shaunae Miller from The Bahamas, 49.92, and in front of Jamaican Novlene Williams-Mills, 51.15 at the Lausanne Diamond League meet in Switzerland, vowing to keep working hard on the track and already setting her sights on next year's Olympics.

Her run came hours after she posted a message "Never giving up" on her account on popular social-media platform Instagram in a message that she said was meant for herself, but also to others dealing with disappointments.

"That was a message for myself because a lot of times you go through things, but I also wanted to inspire other people who may feel the same way I feel right now," she told The Gleaner before pointing to a loaded training programme as the possible reason behind her poor performance at the trials.

"I feel like I know what I did this year, so I'm grateful it happened this year and I'm hopeful we can make the necessary changes to be ready for next season and the Olympics," said Richards-Ross, who was born in Jamaica.

"I think I was overtraining. I started the year wanting to run a PR and worked so hard every day, and I think it left me a little flat in the meet. So we are going to tweak it, give me some more rest days - I am getting older anyway, so I think I can recover faster and race fast again," Richards-Ross stated.