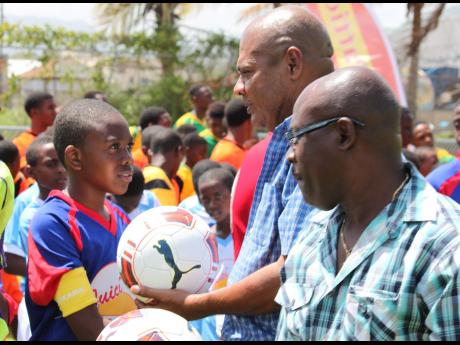 Richard Bryan
Andwelli Powell (left), captain of the Manchester Under-13 team, accepts his team's match ball from Michael Ricketts, chairman of the South Central Confederation, at the launch of the Juici-Patties Under-13 and Under-15 football leagues last weekend at Clarendon Park. Dalton Wint (right) the Confed secretary and Manchester FA President looks on.

In midweek matches, Clarendon journeyed to Kirkvine in Manchester to defeat the home side 1-0 in the Under-13s. The Under-15 match-up between the two ended 0-0.

St Catherine used their home advantage at Spanish Town Prison Oval to win both categories against St Elizabeth by convincing margins. In the Under-13s, St Catherine won 3-0 while they whipped the visitors 4-1 in the Under-15s.

Activities commence at 9 a.m. with a morning session ending at noon. The afternoon session starts at 1 p.m. and ends at 4 p.m.

The Manchester Rifle and Pistol Club (MRPC) will host its July monthly match tomorrow at the Lincoln Range in Mandeville. The match will go beyond the usual limits of a club encounter. It is designed to serve as preparation for the upcoming international match to be hosted jointly by the Jamaica Rifle Association and the Woodleigh Shooting Range in Clarendon on July 25-26.

Early indications are that the MRPC will field at least 10 local pros, hence tomorrow's match should feature a crack field. Eight stages are planned, with the round count exceeding 100 for regular matches.

The range will be open early to accommodate late practice sessions. The match is slated for a prompt 11a.m. start.

Defending champions Edgewater defeated Watson Grove 2-0 to open their campaign in the 2015 Pines Imaging Centre Under-17 Football League at the Ferdie Neita Park field in Braeton. In the second game at the venue, Cedar Grove clipped East Portmore Portals 1-0. Sixteen teams are competing in the league.

Christopher Dunn led the way for Generation United with two goals. Other strikes came from Kenroy Lee and Bruce Chambers.

In other matches played on the day, Knockpatrick FC defeated Central 3-2 while the defending champions Albion FC suffered a 2-1 loss to Mandeville United. This result means the champions are in danger of not advancing to the second round, as they only have one point so far.

Both semi-finals of the Juici-Patties-sponsored Clarendon Netball Association Junior and Senior Open leagues will be hosted tomorrow at the Mineral Heights Sports Centre.

The Junior League semis begin at 1:30 p.m. with a match-up between two Manchester-based high-school teams Knox College and Manchester High. The second semi-final, an hour later, pits another high-school team, Denbigh High B, against the Optimist Club.

The junior games last 40 minutes while the seniors battle for 60 minutes.

Defending champions 65 Waltham Park Road New Testament started brightly in the 2015 edition of the church football league as they carved out a 1-0 win over Hope and Mercy Ministries last Saturday.

In another game, Power of Faith drew 1-1 with Fairview Open Bible. Jermaine Archer (67th minute), opened the scoring for Fairview before Alwin Morgan (81st minute) equalised for Power of Faith.

Defending champions Edgewater and Cumberland have advanced to the final of the East Central St Catherine-sponsored Portmore Under-15 football league following contrasting wins last Saturday. Edgewater defeated Watson Grove 2-0 through goals from Demale Sinclair and Romario McPherson while Cumberland had to dig deep to pull off a hard-fought 1-0 win over Naggo Head. The date and venue for the final will be announced shortly.