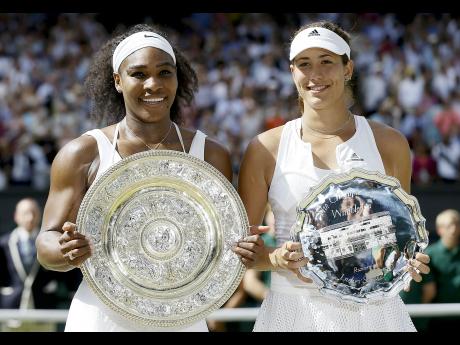 AP
Serena Williams of the United States (left) and Garbine Muguruza of Spain hold up their trophies after the women's singles final at Wimbledon yesterday.

Serena Williams let herself briefly bask in the joy of a sixth Wimbledon championship, 21st Grand Slam singles trophy overall and fourth consecutive major title yesterday, even balancing the winner's silver dish atop her head - Look, Ma, no hands! - as she sauntered off Centre Court.

"I was peaceful, feeling really good," Williams said. "Maybe a little after that, I started thinking about New York."

On to the next one. When the US Open begins at Flushing Meadows in August, Williams will pursue pretty much the only accolade to elude her so far: a calendar-year Grand Slam, something no one has accomplished in tennis in more than a quarter-century.

She will arrive there having won her past 28 matches at major tournaments, the latest coming at the All England Club yesterday, when the No. 1-seeded Williams put aside an early deficit and a late lull, closing out a 6-4, 6-4 victory over No. 20 Garbine Muguruza of Spain.

"I've been trying to win four in a row for 12 years, and it hasn't happened. I've had a couple injuries. You know, it's been an up-and-down process," Williams said. "I honestly can't say that last year or two years ago or even five years ago, I would have thought that I would have won four in a row."

At 33, she is the oldest woman to win a Grand Slam tournament in the Open era of professional tennis, and it comes 16 years after her first, at the 1999 US Open.

Only Maureen Connolly in 1953, Margaret Court in 1970, and Steffi Graf in 1988 have won all four majors in a single season. And only Court (24) and Graf (an Open-era record 22) own more Grand Slam singles titles than Williams.

Her collection includes a half-dozen trophies each from Wimbledon, the US Open and Australian Open, and three from the French Open.

"I just never dreamt I would be out here still," Williams said, "let alone winning."